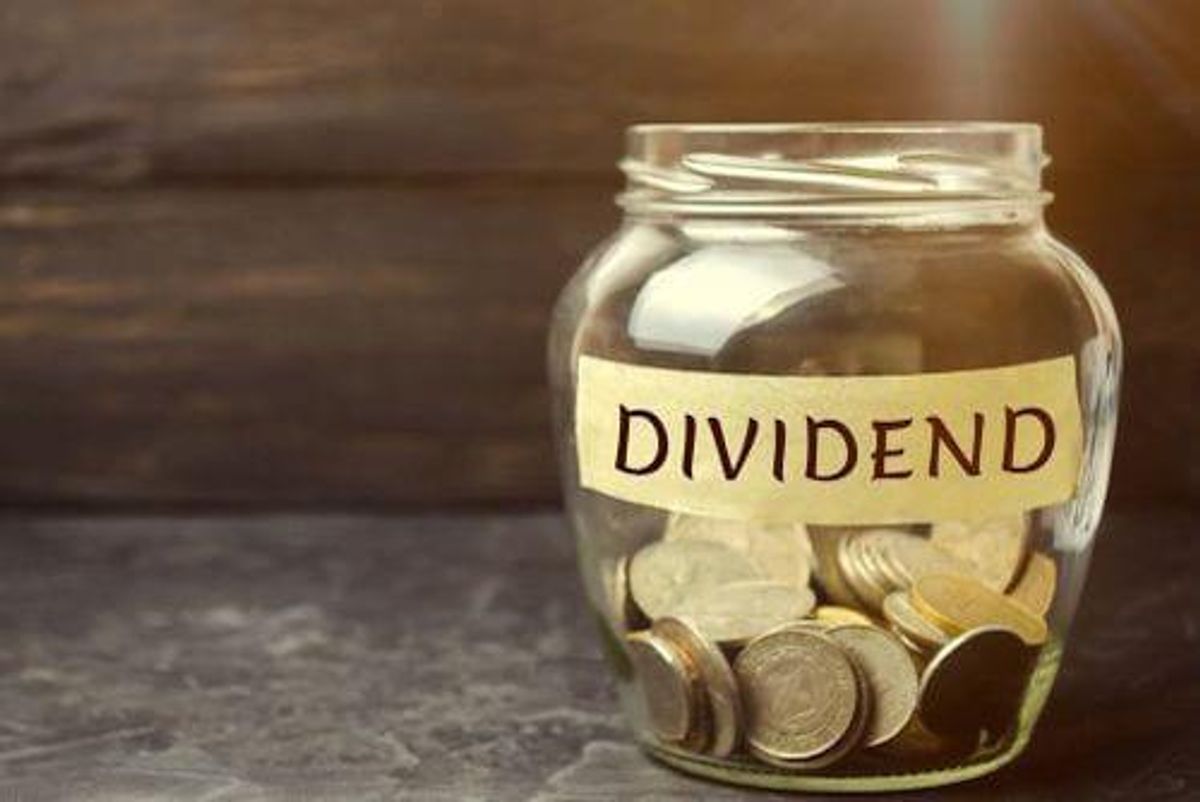 As the price of gold continues to climb, investors may be interested in the top ASX gold stocks that pay dividends.

A dividend is a sum of money that is paid regularly by a company to a class of its shareholders out of its earnings. Dividends are often issued as cash payments, but can also be issued as stock or other property.

Read on for a breakdown of the top five ASX gold stocks that will pay market participants dividends.

Top ASX gold stocks that pay dividends: What is a dividend?

Due to today’s relatively low interest rates, returns from fixed-income investments like GICs have dwindled. That has fuelled investor interest in dividend-paying stocks, which have payouts that are often much higher than what you can get from the bank.

A dividend is essentially a reward that is paid to shareholders for their investment in a company’s equity, which generally comes from the company’s net profits. While the majority of a company’s profits stay within the company as retained earnings, an outstanding portion can be divided up and distributed to its shareholders.

While dividends are generally a sign that a gold producer is flourishing, there are times in which a company may still make dividend payments even when they don’t make suitable profits. This tends to happen when a company wants to maintain their established track record of making regular dividend payments.

In the past, investors didn’t always look to gold stocks as a way to obtain a dividend on top of the earnings they make as a shareholder.

However, a rising number of gold stocks now pay — and often raise — their dividends. This means that if investors select the right ones, they can set themselves up to profit handsomely from both a steady stream of dividend income and the strong capital gains available in resource investing.

Dividends help lower the risk of investing in resources

A dividend is especially attractive in the sometimes volatile gold sector because it gives investors a degree of security: if a company pays a dividend, it generally feels that it has the cash to do so, and will have the ongoing profits it needs to keep those payments coming.

On the whole, dividend-paying companies tend to outperform the market when it’s rising, and perhaps more importantly, decline less than average in a falling market.

A key indicator to consider when investing in dividend-paying gold stocks is the dividend yield, which you can figure out when you take the miner’s total yearly dividend payments and dividing by its share price. This will allow investors to glean how much they will get back in dividends based on each dollar that has been invested.

However, it is important to keep in mind that simply picking stocks with high yields may not be entirely beneficial. This is due to the fact that a company’s yield can be high because its share price has dropped, which is an obvious indicator of serious risk, not only to the dividend but to the investment as a whole.

To get a true measure of the stability of a company’s dividend, then you have to look deeper. Here are three other factors to consider before buying:

A payout ratio of 80 percent or less indicates that a mining stock has the flexibility to both maintain its dividend and make the investments it needs to boost its production or take on further exploration.

Like all publicly listed stocks, gold companies issue shares that are available for investors to trade. When you purchase shares of a gold stock, you are essentially purchasing a stake in the company, making an investment with financial returns or losses from its profits.

There are two main ways that an investor can invest in gold mining stocks. The first way is when market participants purchase through a major mining company. The other way of trading on the stock market is by investing in a gold mining stock through a junior miner (a small cap stock).

Although no gold stock investing is 100 percent foolproof, backing a successful mining company in the precious metals space can alleviate some of the stress of a down stock market when you keep in mind that if a company’s share price goes down, it becomes more affordable to purchase and investors can more than likely anticipate that it will rise again and turn a profit.

While gold stocks are affected by some of the same factors that shape and shift the price of precious metals, they keep some distance from a direct correlation ,because it is possible for a gold miner and its stocks to be in a sound financial situation even in a down market.

Brock Sailer, a partner at Sprott Global Partners, believes that there is an intriguing case to be made for looking at ASX-listed stocks.

“(There are) a bunch of (ASX-listed) mining companies doing exactly the same thing as what the Canadians are doing. So you’ve got to be careful when you’re investing in a Canadian stock — are you getting the best value?” he noted to the Investing News Network (INN).

As his second point, Salier noted that the ASX and even the LSE are home to companies that focus on commodities and geographies that are less common on the TSX and TSXV. For example, he said, London-listed companies tend to be more comfortable with Africa, while companies on the ASX “have taken to (the Tesla (NASDAQ:TSLA) revolution” with more vigor than anyone on the TSX or in London.

Below we’ve outlined the five ASX-listed gold stocks that pay dividends and have seen the biggest gains year-to-date. Data for this article was gathered using TradingView’s stock screener on December 12, 2019, and companies with market caps of over AU$10 million were considered.

Ramelius is a gold producer that has been listed on the ASX since 2003 and began production in 2006.

The company’s original flagship mine, the Wattle Dam, was located approximately 70 kilometres south of Kalgoorlie and was at one stage the highest grade gold mine in Australia. It was operated successfully from 2006 to 2013.

Since then, Ramelius has become more prominent in the space and operations are currently based at Mount Magnet, Edna May and Vivien underground mine near Leinster. Exploration projects are ongoing in Western Australia, as well as in Nevada, US.

The company’s most recent quarterly dividend payment came to AU$0.01 per share and was paid on October 4, 2019.

Independence is a gold exploration and mining company with a strategic focus on high quality assets of scale and longevity. The company’s flagship gold mine is Tropicana, which is located 330 kilometres east north east of Kalgoorlie.

Tropicana is one of the top gold mines in Australia and is a joint venture with AngloGold Ashanti (ASX:AGG,NYSE:AU,OTC Pink:AULGF) — which owns 70 percent — while Independence Group owns the remaining 30 percent. At of the beginning of this year, it was reported that the asset has produced 2.5 million ounces of gold.

The mine spans 3,600 square kilometres, stretching over close to 160 kilometres in strike length along the Yilgarn Craton and Fraser Range mobile belt collision zone. The regional geology is dominated by granitoid rocks and it is a rare example of a large gold deposit within high grade metamorphic rocks that have undergone widespread recrystallisation and melting.

The company’s most recent quarterly dividend payment came to AU$0.08 per share and was paid on September 26, 2019.

Newcrest is currently the largest gold producer listed on the ASX and also holds the title of one of the world’s largest gold mining companies. With headquarters in Melbourne, Australia, the gold producer also has operating mines in Canada, Papua New Guinea and Indonesia.

Newcrest owns or operates (sometimes both) some of the biggest mines within Australia, including Cadia Valley, Boddington and Telfer, to name a few.

Of note, in 2017 Newcrest joined the International Council on Mining and Metals in order to help deliver a safe, fair and sustainable mining and metals industry.

In terms of dividends, Newcrest’s are sustainable over time while keeping in mind its financial policy metrics, profitability, balance sheet strength and reinvestment options in the business.

Looking ahead, Newcrest has set a target dividend payout of at least 10 to 30 percent of free cash flow generated for that financial year, with the dividend being no less than US$0.15 per share on a full year basis.

The company’s most recent quarterly dividend payment came to AU$0.14 per share and was paid on September 26, 2019.

Since the acquisition of the high-grade, low-cost Paulsens mine in 2010, the miner has continued to build a portfolio of high-quality, high-margin mining operations, with the aim of delivering maximum total returns to its shareholders.

The company also owns the Jundee mine, which it purchased from Newmont (TSX:NGT,NYSE:NEM), now Newmont Goldcorp, in 2014 for AU$82.5 million.

The project is well-known due to the fact that it solely uses underground mining and not the often utilized open pit mining. Jundee produces around 1.8 million metric tons of ore per year, which yields 499,000 ounces of gold.

Most recently, the asset has yielded significant profits for Northern Star, with revenues of over AU$4 million during the first half of 2018 alone.

The miner’s last dividend was for AU$0.07 and was paid on November 20 of this year.

Evolution Mining owns one of the largest mines in Australia, Cowal, which is the largest gold mine outside of Western Australia. The asset is located 350 kilometres west of Sydney, in New South Wales.

Most recently, Evolution was granted regulatory approval to increase the plant processing rate by 31 percent from 7.5 million metric tons per annum to 9.8 million.

Since introducing the dividends, the miner has paid out 13 consecutive dividends in each half-year. In August 2017, Evolution updated its dividend policy of whenever possible paying a half-yearly dividend equivalent to 50 percent of the group’s after tax earnings.

The company’s most recent dividend payment came to AU$0.06 per share and was paid on September 27, 2019.

Don’t forget to follow us @INN_Australia for real-time updates!

Securities Disclosure: I, Nicole Rashotte, currently hold no direct investment interest in any company mentioned in this article.

Sentinel Resources Corp. (CSE: SNL) (US OTC PINK: SNLRF) (“Sentinel” or the “Company “) announces that all of its exploration licenses in New South Wales, Australia have now been granted. The Company has commenced contacting landholders in high priority areas in order to negotiate the access agreements required prior to conducting field visits on private property. As previously announced, the Company has identified four priority areas for initial inspection: Carrington, Hill End South, Golden Bar, and Toolom South.

OceanaGold Corporation (TSX: OGC) (ASX: OGC) (the “Company”) appoints Mr. Michael (Mick) James McMullen and Mr. Paul Benson as Non-Executive Directors to the Company Board of Directors (the “Board”).

2020 was a record-breaking year for gold, which surged above US$2,060 per ounce in August.

However, the yellow metal faced some downward pressure in the first quarter of 2021, falling below US$1,750 in March. The major forces acting against gold in Q1 of this year included rising US 10 year Treasury yields and the growing value of the US dollar.

However, there is still plenty of investor interest in the metal due to continued global economic uncertainty related to the COVID-19 pandemic. Supply is also a growing concern due to decreased gold exploration efforts over the last few years, especially among larger companies.

Newcrest Mining Limited (ASX: NCM) (TSX: NCM) announces that Gerard Bond, the Company’s Finance Director and Chief Financial Officer, has decided to retire effective 3 January 2022 when he will mark 10 years in the role.

Mr Bond said, “It has been an honour and privilege to serve as the Finance Director and CFO over the past decade and be part of the transformation of the Company”.

News Provided by Newsfile via QuoteMedia

(All financial figures in US Dollars unless otherwise stated)