This Auroch Minerals profile is part of a paid investor education campaign.*

The supply and demand of nickel have stirred the attention of the markets with its recent price closing above US$20,000 per ton, with the potential of reaching US$24,000 by 2022. The increasing demand for commodities, such as stainless steel and batteries, limited new sources of supply, export bans, and the electric vehicle (EV) revolution are fueling this demand for nickel and its recent price increases.

The global shift towards EV transportation continues to play a major factor in generating demand for nickel. By 2030, it is estimated that there will be a 5-fold increase in the demand for this metal, with the potential to achieve a 600 percent increase by 2040. This surge in demand is an opportune time for Australian mining companies since Australia has the world's largest nickel reserves, and Western Australia is currently the sole producer of nickel.

Auroch Minerals (ASX:AOU) is an exploration company located in Western Australia with existing access to high-grade nickel sulfide for development and production. The company is strategically located in the Norseman Wiliuna Greenstone Belt, a tier-one jurisdiction, which contains some of the best nickel sulfide deposits globally. 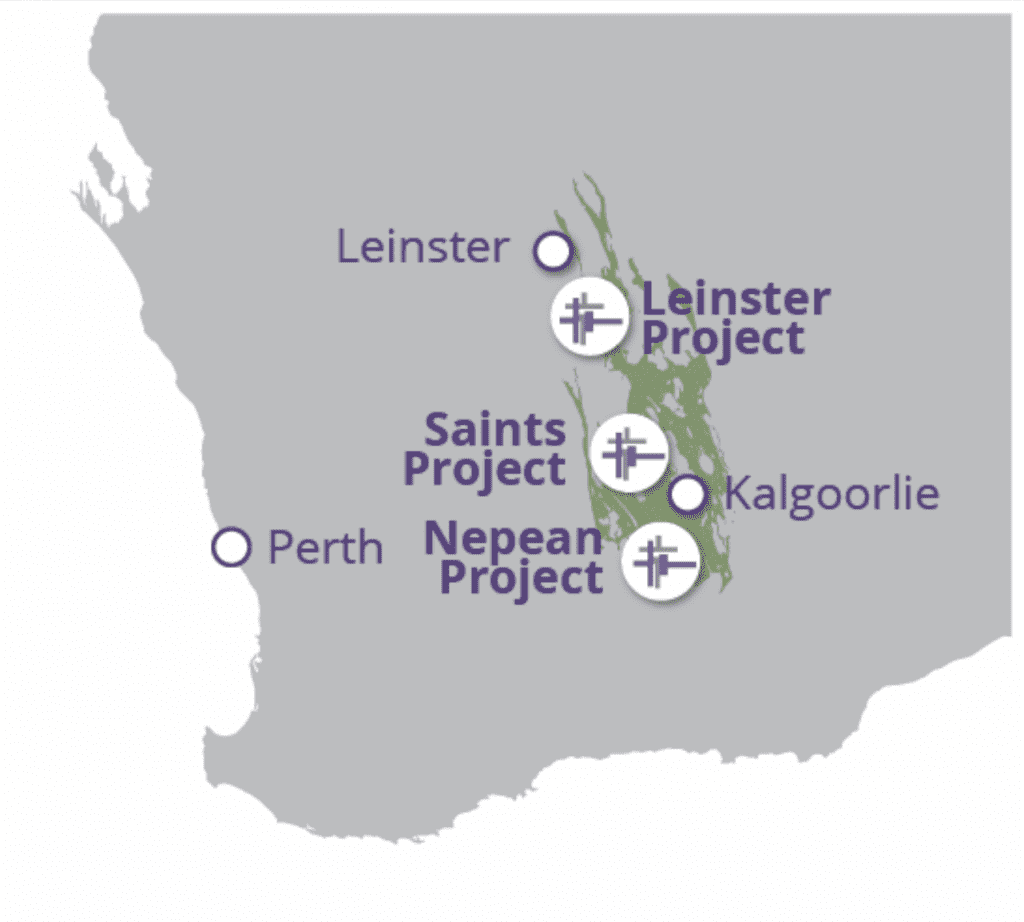 Auroch's three projects are situated near the Goldfields Highway for easy access to five processing plants within trucking distance. Furthermore, the company has an existing partnership with BHP Nickel West (ASX:BHP) to assist with processing and short- to medium-term production.

"We already have high-grade resources. And we're starting to move into [the] realm of studies and quickly moving into development and production, and feeding those hungry BHP plants that have already come to us for our ore… And now we can produce in the not too distant future," commented Aidan Platel, Managing Director at Auroch Minerals, in an interview with INN.

Auroch's flagship Nepean nickel project was a historic mining area that generated over 32 kilotons of nickel at less than 500 meters deep. There is a massive exploration potential as the company plans to drill past a pegmatite vein to access the Nepean deeps target area. Compared to Western Area's (ASX:WSA) Flying Fox nickel mine, it had a similar pegmatite vein. Their deep mining of over 1200 meters produced over 100 kilotons of nickel.

The Leinster project spans over 331 square kilometers with a focus on exploring nickel and copper deposits. Leinster is a world-class gold, nickel, and base-metal province and hosts BHP's Leinster Group. This site also contained nickel and copper at shallow depths and thus there is a huge potential to explore deeper and the surrounding areas. 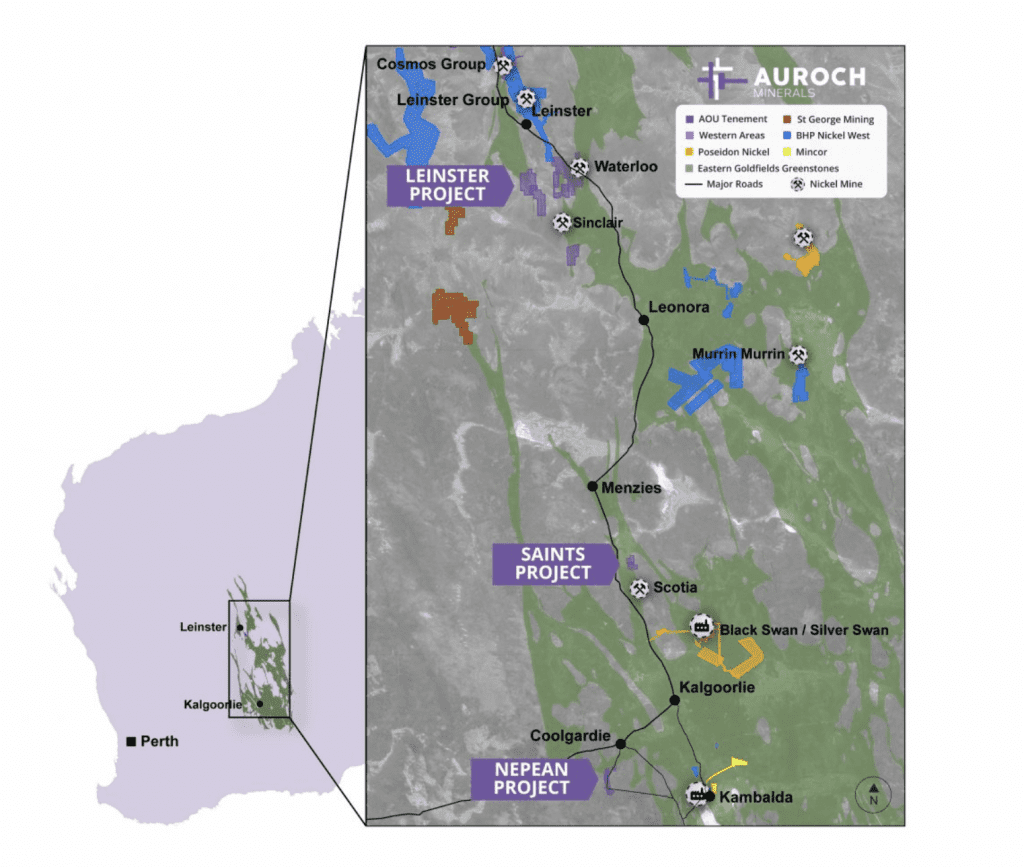 The Saints project is a high-grade, JORC(2012)-compliant resource with 1.05 metric tons at 2 percent nickel and 0.2 percent copper for over 21 kilotons of contained nickel. Auroch began drilling in early 2020 and now is underway for scoping studies in partnership with experienced P1 Australasia Pty Ltd.

Auroch has a strong cash position of AU$2.6 million in addition to underwritten option proceeds of AU$1.6 million. The company has no debt and the current market cap is worth AU$50.1 million with 295 million shares as of September 9, 2021. Approximately one-third of the company is owned by the top 20 shareholders, demonstrating a strong backing by existing stakeholders.

Auroch has a well-experienced team to lead the company to success. Of particular note, Matthew McCarthy is an accomplished geologist with over 20 years of experience in minerals exploration and business development. He was previously the principal geologist at BHP. The team combines geological and financial expertise with over decades of experience to execute Auroch's corporate strategy.

The flagship Nepean nickel project is a historic high-grade sulfide mine, which produced 1,107,457 tons of ore between 1970 to 1987 for 32,202 tons of nickel metal at an average recovered grade of 2.99 percent nickel. 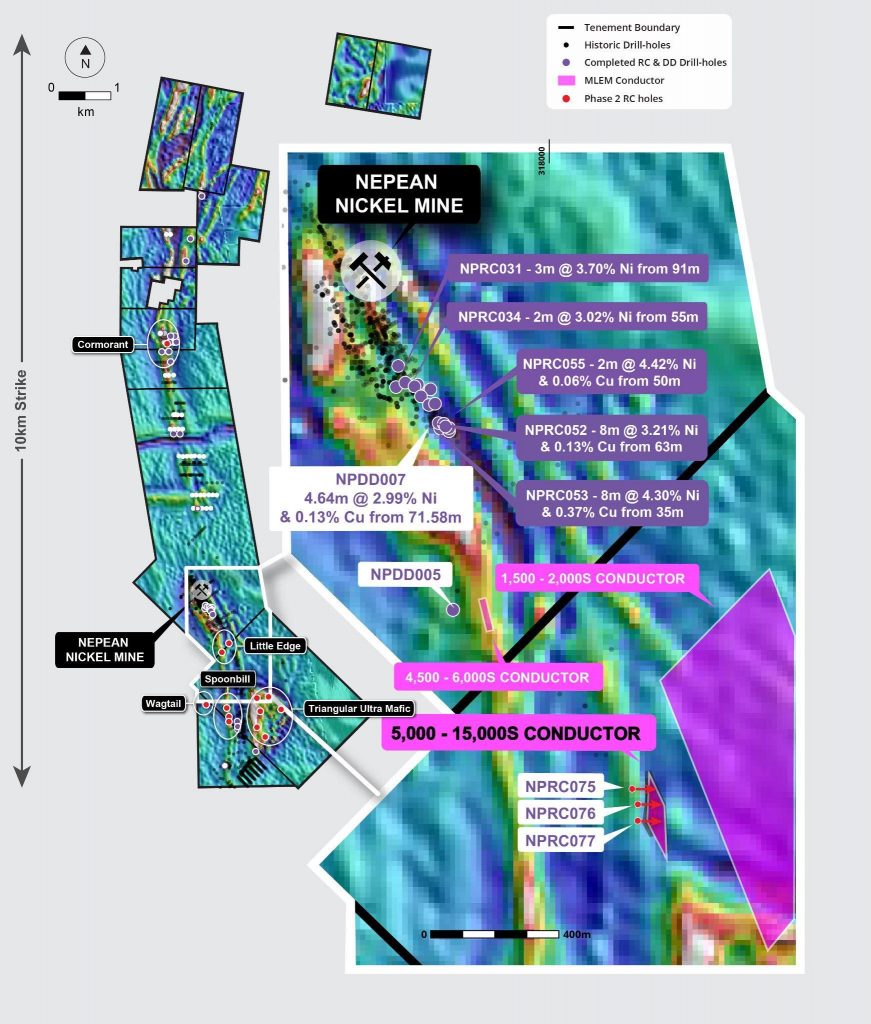 Auroch plans to explore below these historic mine workings with massive potential to discover more nickel underneath a pegmatite vein. The current depth of Nepean sits at around 500 meters deep. Compared to Western Area's Flying Fox nickel mine, it had a similar pegmatite vein. Their deep mining of over 1200 meters produced over 100 kilotons of nickel.

The company has commenced a 3,000-meter diamond drill program, with the first 2 holes primarily for geophysical testing. Scoping studies with P1 Australasia are underway. The studies will assess the possibility to begin open-pit mining of the shallow nickel sulfide mineralization. This will provide significant cash flow in the short- to medium-term.

The deep drill exploration and regional exploration of Nepean provides multiple opportunities for Auroch to discover a significant supply of nickel sulfides. 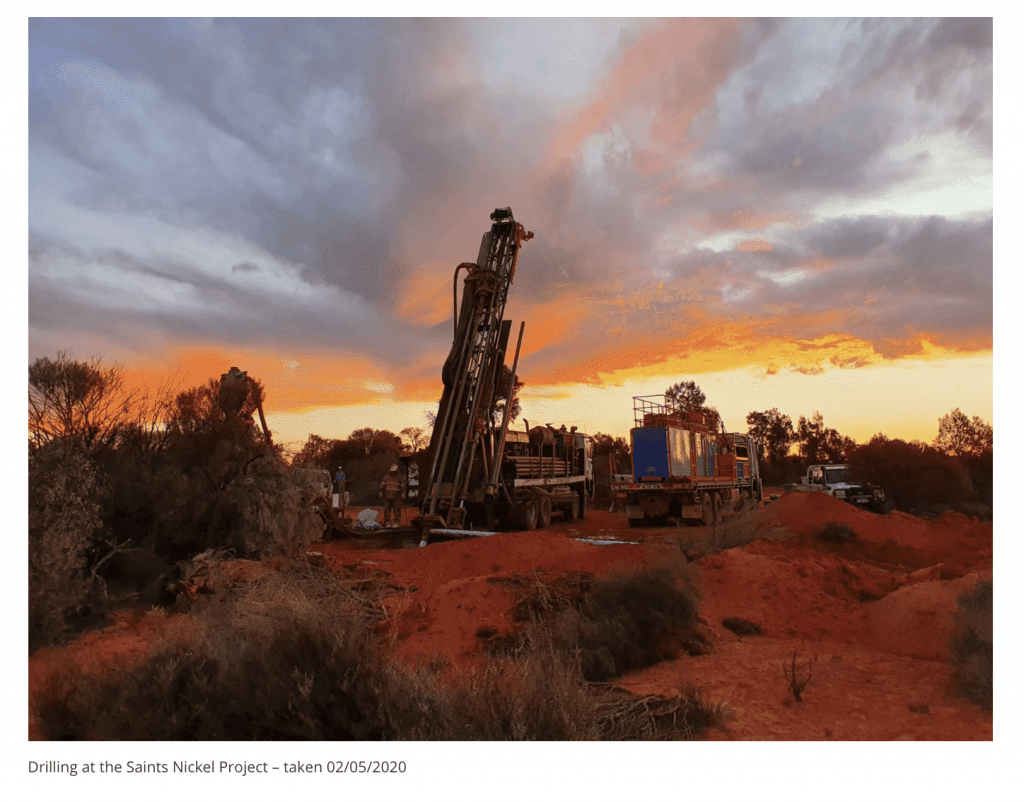 Auroch began drilling at this site in early 2020 and scoping studies are now underway in partnership with the experienced P1 Australasia. These promising results provide Auroch with a large platform to expand the company's high-grade nickel resource.

The Leinster nickel project is located near the town of Leinster, a world-class gold, nickel, and base-metal province. BHP's Leinster Group is located nearby as well. The project spans over 331 square kilometers. 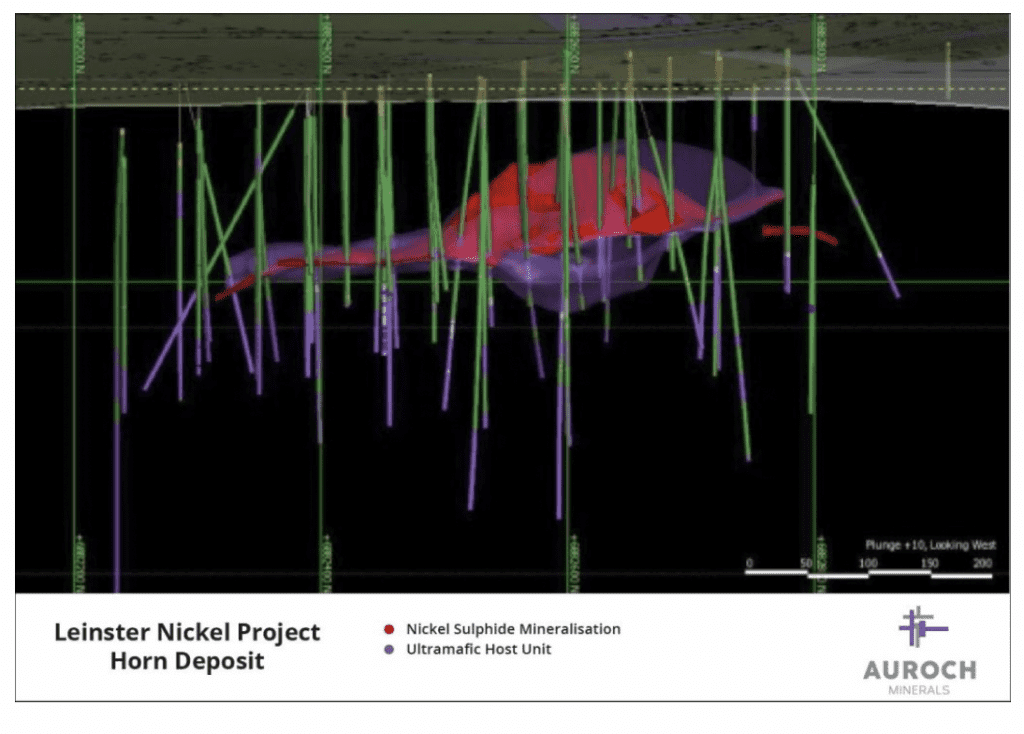 Edward Mason has more than 20 years of experience working for global investment banks such as Bank of America Merrill Lynch, HSBC, Renaissance Capital and more recently, Royal Bank of Canada in senior leadership roles focused on the natural resources sector and spanning equities, derivatives and capital markets. Prior to this Mason worked for over five years as a technical project manager for Fluor Corp on the development of nickel and copper assets near Auroch's existing operations, including the development of the Murrin Murrin nickel mine in Western Australia and the Olympic Dam copper expansion project in South Australia.

Aidan Platel is a geologist with over 20 years of experience in the minerals industry, in both mining and exploration roles across a wide range of commodities. Recently, Platel has worked as an independent strategic consultant focusing on project evaluation, prior to which he spent 12 years in South America in mining and exploration. He has a proven track record of exploration success having discovered and developed several major deposits including the world-class Santa Rita Nickel deposit (>1Mt contained Ni metal).

Mike Edwards is a geologist and economist with over 20 years of experience in senior management in both the private and public sector. He spent three years with Barclays Australia in their Corporate Finance department and then eight years as an Exploration and Mine Geologist with companies including Gold Mines of Australia, Eagle Mining and International Mineral Resources.

Edwards has worked as a consultant across a range of industries both as a geologist and corporate advisor, predominantly in Australia and Africa. He has been involved in numerous ASX listings, raising seed and IPO capital as well as being intimately involved in several reverse takeovers across a range of commodities and industries.

Trevor Eton is a well-respected finance executive with over 35 years of extensive experience in corporate finance within the minerals industry. His previous full-time role was as CFO and Company Secretary of sulfide nickel producer, Panoramic Resources Limited (ASX:PAN) (Panoramic) from 2003 to 2020 in which he was instrumental in the financing, construction and development of the Savannah Nickel Project and the acquisition and subsequent development of the Lanfranchi Nickel Project, which saw the company reach a market capitalization exceeding $1 billion in 2007. Prior to Panoramic, he held corporate finance roles with various other resource companies, including diversified metal producers, MPI Mines Limited (MPI) and Australian Consolidated Minerals Limited (ACM).

Eton holds a Bachelor of Arts (Hons.) degree with a major in economics from the Victoria University of Wellington (VUW), New Zealand, a Post Graduate Diploma in Management from the Melbourne Business School and is an Associate Fellow of the Australian Institute of Management (AFAIM).

Rebecca Moylan is an experienced CFO with expertise in financial and corporate management, accounting, project financing and contract negotiation. During her career in the mining industry, she has spent nearly 10 years in various senior roles. This has included positions as CFO and Company Secretary of several ASX-listed companies.

Moylan holds a Bachelor of Business (Accounting and Finance), is a Certified Practicing Accountant (CPA), a fellow of Financial Services Institute of Australasia and a Graduate Member of Australian Institute of Company Directors (GAICD).

Matthew McCarthy is an accomplished geologist with over 20 years of experience in minerals exploration and business development. McCarthy has been involved in significant greenfields and brownfields discoveries and provided leadership and management of successful exploration teams and large resource definition programs. He was previously the Principal Geologist at BHP – Nickel West and Exploration Manager at St George Mining Ltd.

The information contained here is for information purposes only and is not to be construed as an offer or solicitation for the sale or purchase of securities. Readers should conduct their own research for all information publicly available concerning the company. Prior to making any investment decision, it is recommended that readers consult directly with Auroch Minerals and seek advice from a qualified investment advisor.