Where They Rank: Australian Mining Jurisdictions

Here’s a look at Australian mining jurisdictions, including how much the country’s states export and how they compare to foreign peers.

Australia is well-known as a prolific mining nation, having large sections of its economy built on mining since the mid-1800s onwards.

Minerals account for up to 46 percent of Australia’s export revenue according to Geosciences Australia, giving the mining industry an 8.1 percent share of GDP.

But not all states in Australia are equal, with the premier jurisdiction and source of wealth being Western Australia, which takes up the western third of the arid continent.

Australian mining jurisdictions: The states themselves

According to data from the Department of Foreign Affairs and Trade (DFAT), of the AU$403.2 billion worth of goods and services exported from Australia in the 2017-2018 financial year, Western Australia accounted for AU$139.8 billion, or 34.7 percent — despite being home to only 10 percent of the national population.

The majority of exports from Western Australia were of course natural resources, with the state contributing almost the entirety of Australia’s AU$61 billion worth of iron ore exports.

Of the remainder in the resources category, the state also exported AU$17 billion in gold, more than AU$4.5 billion in oil, AU$1.5 billion in copper ores and almost another AU$3 billion in other metals and ores combined.

Natural gas was rated as the second most valuable commodity to the state, but due to confidentiality restrictions, DFAT did not report how much the resource brought in for Western Australia. 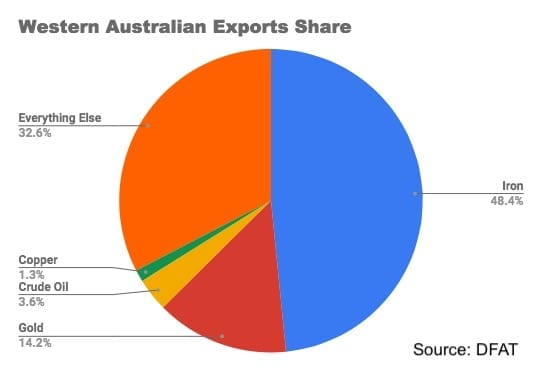 Next in line for total exports was Queensland, accounting for 22.4 percent of the national total with AU$90.3 billion in exports.

Of that total, more than a third came from coal exports, with AU$33 billion worth of the black sooty rock departing Australian shores from mines in Queensland.

The second largest reported export from the state was copper, at another AU$1.5 billion. The rest of the minerals added up to about AU$4 billion.

Of the remaining states, New South Wales contributed another AU$17 billion in coal exports and AU$6 billion in other minerals (mostly copper, gold and aluminum) while South Australia made AU$1.1 billion in copper ore and Tasmania made AU$1 billion in refined zinc exports.

Finally, despite exporting AU$51 billion in goods and services in 2017-2018, Victoria’s combined mineral and fuel exports added up to a little over AU$1.5 billion, with the majority of the AU$29 billion in goods exported from the southern state being mostly agricultural and the remaining AU$22 billion coming from services.

In total, unrefined minerals and fuels accounted for AU$135.5 billion in exports — a total that excludes refined materials like zinc, aluminum and gold — which alone pulled in another AU$19 billion.

Returning to natural gas, while export numbers from each state weren’t reported by DFAT, national statistics from the same department reported the resource was worth AU$31 billion in export value.

With such a huge contribution to Australia’s overall economy due to mining, Western Australia attracts global attention — and global comparisons.

According to the Fraser Institute’s Annual Survey of Mining Companies 2018, Western Australia ranked second on its Investment Attractiveness Index, behind Nevada, United States, at number one.

The annual survey quizzes mining and exploration companies operating in jurisdictions around the world on a number of different issues including administrative processes, environmental regulations, government transparency and ease of permitting, infrastructure, trade, security and availability of labor.

Enough companies from 83 national and subnational jurisdictions responded in 2018 for the Fraser Institute to draw conclusions on overall investment attractiveness.

According to the data, after Western Australia, Queensland was the second most attractive Australian jurisdiction, coming 13th overall globally.

After that, Australian states and territories fall away quickly on the global scale, with the Northern Territory in 23rd place, South Australia in 24th, New South Wales in 42nd, Victoria in 54th and Tasmania in 55th out of 83 jurisdictions.

Besides Nevada, the United States had another three states in the top 10: Alaska came in fifth place globally, Utah came in seventh and Arizona at eighth.

Filling out the remainder of the top 10 were Canada’s provinces Saskatchewan (third), Quebec (fourth) Yukon (ninth) and the Northwest Territories (10th), and Chile, which ranked sixth.

Securities Disclosure: I, Scott Tibballs, hold no direct investment interest in any company mentioned in this article.

Australia’s Orocobre (TSX:ORL,ASX:ORE) and Galaxy Resources (ASX:GXY,OTC Pink:GALXF) agreed this week to join forces in a AU$4 billion “merger of equals.” The deal comes as demand for lithium for electric vehicle (EV) batteries continues to pick up pace.

Once the merger is complete, the new company will become a top five lithium chemicals company globally — and top three outside of China — with production capacity of around 40,000 tonnes of lithium carbonate equivalent per year.

The following issues have been halted by IIROC:

Climate change is a looming issue for Australians, with 82 percent concerned about bushfires and 81 percent worried that drought or flooding will affect crop production and food supply.

This is where conscious investors look to the cleantech sector, which covers everything from renewable energy to low-emission technologies to water technology to battery storage and more.

What should investors know about cleantech in Australia before they jump in? Read on for a look at key factors, including market size, the industries encompassed by cleantech and big players to watch.

The announcement can be viewed at:
https://www2.asx.com.au/markets/trade-our-cash-market/announcements.gxy

– Hastings announces signing of a major offtake contract for the supply of its high grade product from its Yangibana Rare Earths Project in Western Australia to thyssenkrupp Materials Trading GmbH.

Orocobre and Galaxy agree to a proposed A$4B merger of equals, establishing a new force in the global lithium sector

Argyle Diamond Mine Closure: The End of a Sparkling Era