Focused on the early-stage exploration through to development

This Balkan Mining and Minerals profile is part of a paid investor education campaign.*

You've come to the right place to know Balkan Mining and Minerals. At INN our Mission is to arm you with knowledge and connect you with investing opportunities! Ready for the next step? Download the FREE Investor Kit TODAY to get the institutional investor details!

The recent boom in electric vehicle (EV) adoption and green technologies has seen global demand for lithium skyrocket. Analysts believe EV penetration could reach 35% by 2030, which means lithium production will need to quadruple between 2020 and 2030 to satisfy this growing demand.

Lithium production is often associated with countries like Chile, Australia and Argentina — but strategic policy shifts in the European Union have led Europe to look inward for essential battery metals, placing the spotlight directly on the Balkan states. While the Balkan states, which includes Albania, Bosnia and Herzegovina, Bulgaria, Croatia, Kosovo, Montenegro, North Macedonia, Romania, Serbia and Slovenia, are best known for historic gold production — recent lithium discoveries in Serbia have renewed interest in this region.

Balkan Mining and Minerals (ASX:BMM) is focused on an early-stage exploration through the full development of lithium and boron mining in the Balkan region. The company is committed to building an ethical resource portfolio backed by strategic partnerships and guided by an experienced board and management with regional expertise.

The Balkan states, and Serbia in particular, are well-endowed with many minerals and have attracted a surge in foreign investors for the exploration of mining operations. Serbia's Vardar zone is an emerging tier 1 lithium-borate jurisdiction. Balkan Mining and Minerals is well-positioned to capture the growth of the European lithium and boron supply chain. 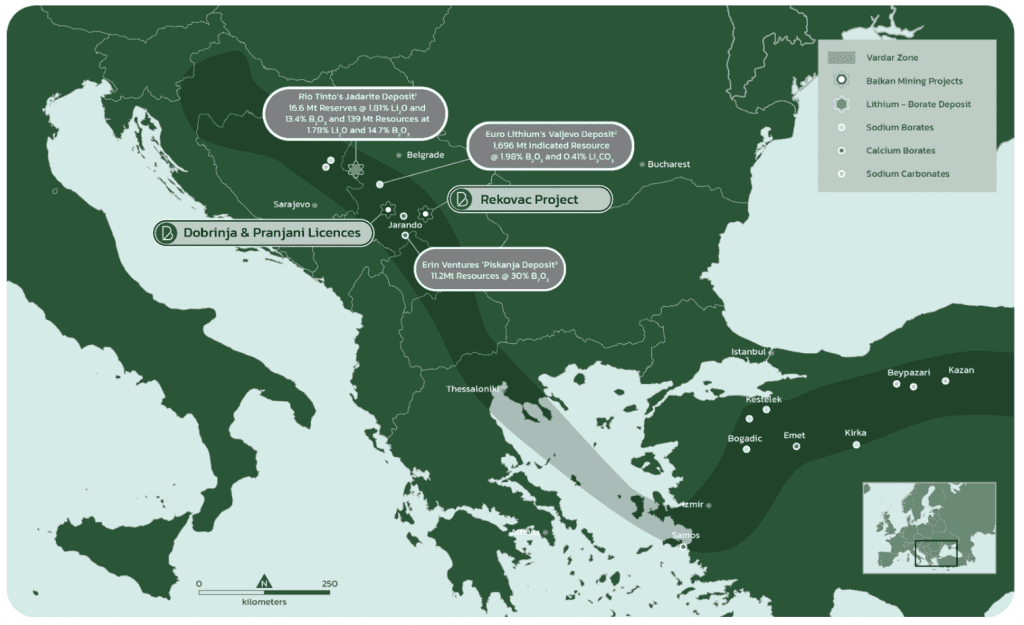 The company continues to expand its reach across Serbia with four new exploration permits recently granted. The Ursule and Siokovac licenses provide expansion of Rekovac and span nearly 200 square kilometers. The Dobrinja and Pranjani licenses provide access to Western Serbia with favorable lacustrine strata for hosting lithium and boron.

"It's the right region, it's the right commodity and the right capital structure with the right investors… the key thing to add to that is what differentiates this particular lithium project from many of the other … lithium companies, at least listed in Australia, is the borate angle… So that makes these types of things extremely economic and extremely easy to mine and process," commented Ross Cotton, managing director.

Balkan Mining and Minerals is backed by Sandfire Resources (ASX:SFR). The company's current market cap is AU$36 million with 45 million shares on issue.

The leadership of Balkan Mining and Minerals includes a highly commercial board with decades of experience. Sean Murray serves as chairman and brings executive experience from Rio Tinto and expertise in industrial minerals. General Manager Dejan Jovanovic is the Balkan region expert with over 15 years of experience as a geologist. The company has a strong combination of experience and expertise to be a leader in the lithium and boron space.

The flagship Rekovac lithium-borate project is located in the world-class Vardar Zone in Serbia, an emerging tier 1 lithium-borate jurisdiction. The project has easy access to the motorway and modern rail corridor, thus providing a solid infrastructure to Central and Western Europe. 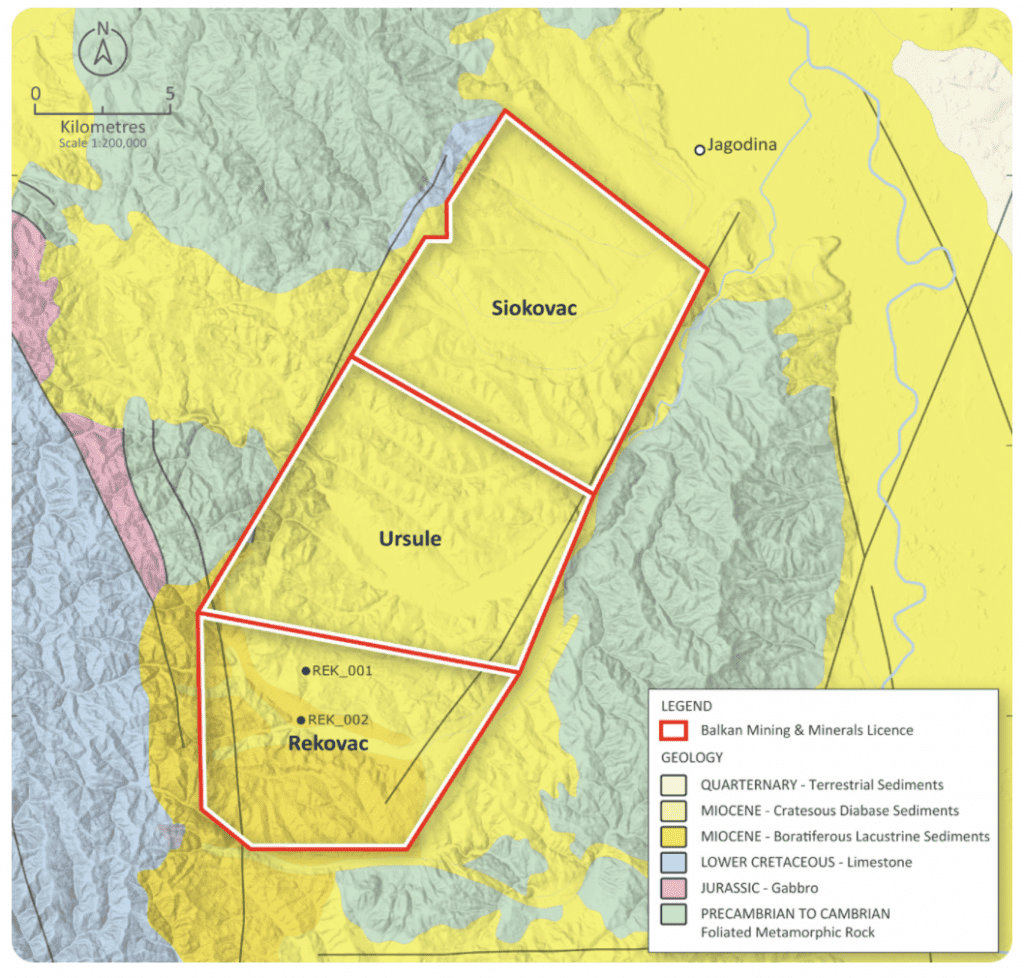 The success of the initial drilling and exploration has provided a solid foundation to explore additional areas of Rekovac as well as two additional adjacent areas under the Ursule and Siokovac licenses. The recently completed surface mapping of the entire Rekovac area has identified five dominating sedimentary formations. The samples will be sent to a laboratory for mineral phase determination using the X-ray diffraction method.

Balkan Mining and Minerals plans to measure magnetic properties over the entire diamond drill core. In addition to measuring magnetic susceptibility, the company will measure the bulk density of samples selected from the drill core. These two parameters will guide geophysics surveys across high-priority areas and ultimately define and commence new drilling programs.

The Cacak project comprises the Dobrinja and Pranjani license and is located in Western Serbia about 90 kilometers south-southwest of Belgrade, the capital of Serbia. A database study conducted by the Yugoslav Geological Survey identified favorable lacustrine strata for hosting lithium and boron. 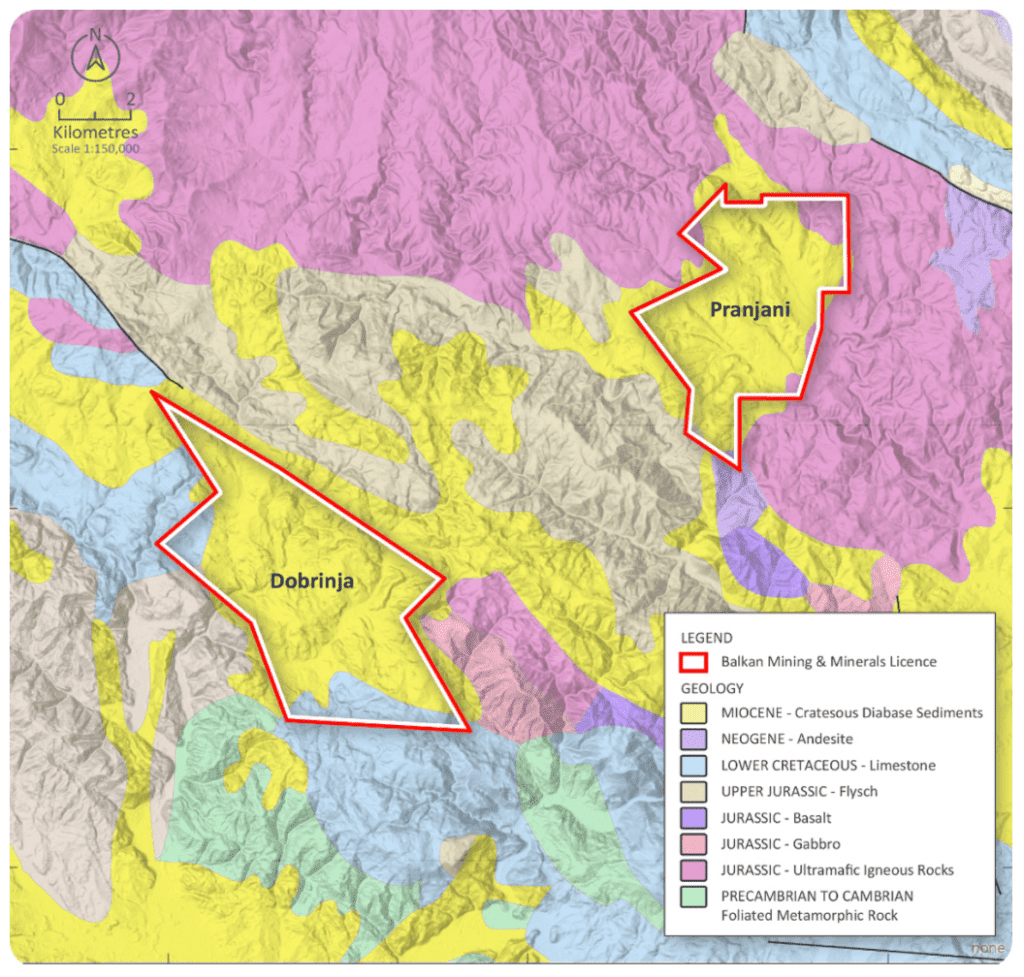 The project is in its early exploration phase and will focus on target generation using regional geophysics, geological mapping, and surface sampling. Upon completion of the initial assessment, drill testing of the target locations will be conducted. The licensed areas are within the Vardar Zone and present the company with another location for extracting lithium and boron minerals.

Ross Cotton has over 15 years of experience in the securities and mining industries and has been instrumental in both the financing and management of mining and resource companies globally.Cottons' experience in investment banking and equity capital markets has provided him with detailed experience in corporate transaction management and execution. In these roles, Cotton has been integral in the recapitalization and restructuring of companies, including managing of initial public offerings and reverse takeovers. In addition to a number of managerial roles with ASX listed companies, Cotton has also provided corporate advisory services to listed companies on strategy, acquisitions as well as financing via both debt and equity for a number of years.Cotton currently manages a private mining strategy and finance consulting business and utilizes his networks established in investment banking, mining and management to provide solutions for the effective implementation of business strategies and management solutions.

Sean Murray has an Honors degree in modern languages and a post-graduate Master's Degree in Business Management and Economics from the Manchester Business School, part of the University of Manchester Institute of Science and Technology, in the United Kingdom. Murray has more than 40 years of experience worldwide in the chemicals and mining industries, including non-ferrous metals and minerals and industrial minerals. His successful executive management career includes senior roles with Australian Mining and Smelting (CRA), Pasminco Europe and Pasminco Inc and Rio Tinto plc where he became Managing Director of Borax Europe and then Deputy Chief Executive, Rio Tinto Borax in the 1990s and early 2000s.

Murray has also served on the boards of Rio Tinto operating companies either as president or as an executive director in the USA (California), Argentina, France, Germany, Holland, Spain and Italy. He has been a Vice-President of the European Zinc Institute (The Hague), and an Industry Advisor on non-ferrous metals and minerals to the UK government at the International Lead Zinc Study Group, (United Nations). He was a vice-president of the Industrial Minerals Association and president of the European Borates Association in Brussels where he became involved in Public Relations and Sustainable Development.

Since 2005, Murray has provided consulting services on marketing, planning and strategy to the industrial minerals sector in Europe, Australia and the Americas and has held non-executive directorships on the boards of AIM and ASX listed copper, gold, tungsten, potash and fluorspar companies including, Fluormin plc (formerly LSE:FLOR and Potash Minerals Ltd (formerly (ASX:POK)). He was a senior partner in a New York based LLP developing minerals businesses in the former Soviet Union. Murray is fluent in a number of European languages including German and Spanish.

Murray has British and Irish citizenship and lives in Surrey in the United Kingdom.

Luke Martino is a Fellow of the Institute of Chartered Accountants in Australia and the Australian Institute of Company Directors, having worked for over 30 years with major accounting firms, where he held senior leadership positions and Board memberships including Lead Partner of Deloitte's Growth Solutions practice in Perth until 2007 when he left to establish boutique corporate advisory and accounting firm, Indian Ocean Advisory Group.

Martino has extensive experience in mining and resources, property and hospitality industries and is a specialist in corporate and growth consulting.

Milos Bosnjakovic is a lawyer by profession with strong links and experience in the Balkan countries of the former Yugoslavia Republics, Australia and New Zealand. He has been involved in the resources industry in Australia and the Balkans for almost 20 years and has considerable corporate experience within the industry.

Bosnjakovic is a dual national of Australia and Bosnia and Herzegovina and was also the co-founder of ASX-listed Sultan Corporation Limited which became Balamara Resources Limited, which held the Monty Zinc Project in Montenegro. Milos was co-founder of ASX-listed Adriatic Metals PLC (ASX: ADT) and his previous roles have also included acting as Non-Executive Director and Country Manager of Adriatic Metals PLC.

Dejan Jovanovic is a geologist with more than 15 years of experience in managing complex exploration projects and mineral deposit evaluation. He is a well-rounded exploration professional with significant commodity experience including lithium, borates, base and precious metals. Jovanovic implemented and encouraged the highest standards of technical and operational excellence across multiple project support groups. He has held numerous positions throughout his career including notable roles with Rio Tinto (Serbia) where he worked on Rio Tinto's Jadar lithium-borate deposit; senior exploration roles with Lithium Li Ltd / Pan Global Resources Inc. serving as a key leadership capacity for exploration programs in the Balkans. Jovanovic has also acted as an exploration management consultant to various clients including European Lithium and General Manager Exploration for Jadar Resources Limited (ASX:JDR).

Jovanovic holds a Master of Science in Economic and Exploration Geology from the University of Belgrade, and a member of the Professional Geological Societies (QP), and a fellow of the European Federation Geologist (CP in accordance with the JORC Code).

Harry Spindler is an experienced corporate professional with a broad range of corporate governance and capital markets experience, having held various company secretary positions and been involved with several public company listings, merger and acquisition transactions and capital raisings for ASX-listed companies across a diverse range of industries over the past 22 years.

Spindler is a member of the Institute of Chartered Accountants Australia and New Zealand and a member of the Financial Services Institute of Australia. Spindler began his career in corporate recovery and restructuring at one of Australia's leading independent financial advisory and restructuring providers Ferrier Hodgson (now KPMG) and has for the past 11 years working for a corporate advisory firm, Indian Ocean Consulting, through which he has advised a number of clients in a range of industries, as well as held positions as company secretary for a number of ASX-listed companies, including Sino Gas & Energy Holdings Ltd (ASX:SEH; ASX:300), an Australian energy company focused on developing gas assets in China.

Nenad Loncarevic has 30 years of mineral exploration experience. He is highly experienced in target generation, project evaluation and exploration program implementation for gold, base metals and industrial minerals. Loncarevic possesses an outstanding knowledge of many deposit styles with particular strengths in polymetallic systems and sedimentary type deposits.

Loncarevic holds a Master of Science in Economic and Exploration Geology from the University of Belgrade.

The information contained here is for information purposes only and is not to be construed as an offer or solicitation for the sale or purchase of securities. Readers should conduct their own research for all information publicly available concerning the company. Prior to making any investment decision, it is recommended that readers consult directly with Balkan Mining and Minerals and seek advice from a qualified investment advisor.