Blackstone Minerals Limited (ASX:BSX) is pleased to announce that drilling at the King Cobra discovery has intersected 60m @ 1.3% Nickel from 32m at the Ta Khoa Nickel Project in Northern Vietnam.

▪ Blackstone’s drilling at the King Cobra discovery has intersected 60m @ 1.3% Nickel from 32m including 13.9m @ 2.25% Nickel from 49m (Figures 1 & 2 and Tables 1 & 2 for full details);
▪ Blackstone’s drillhole BP19-03 which returned 45m @ 1.2% Nickel from 56m is now interpreted as an earlier intersection of King Cobra mineralisation (see ASX announcement dated 6th August 2019 & 17th September 2019 for full details);
▪ Blackstone’s drilling has now intersected the King Cobra (KCZ) discovery zone over 200m of strike length, with the KCZ interpreted to be open along strike to the north west and south east and down dip to the north east (see Figure 1);
▪ Assay results are reported in this announcement for six new drill holes (see Table 1 for drillhole results for BP19-25 to BP19-30) all returning significant intersections of nickel mineralisation;
▪ Hole BP19-29 returned the most significant downhole intersections seen to date at the Ta Khoa Nickel Project, with 60m @ 1.3% Nickel including 13.9m @ 2.25% Nickel from the King Cobra Zone, and 142m @ 0.41% Nickel including 11.9m @ 1.09% Nickel from the underlying previously unnamed Ban Duoi Zone (BDZ);
▪ Blackstone is continuing its aggressive drilling program at Ban Phuc with four drill rigs testing the disseminated mineralisation (DSS), including two rigs on priority step-out drilling testing for potentially significant expansions to the known Ban Phuc DSS orebody and the down dip feeder zone target at the King Cobra target zone (see Figure 1); 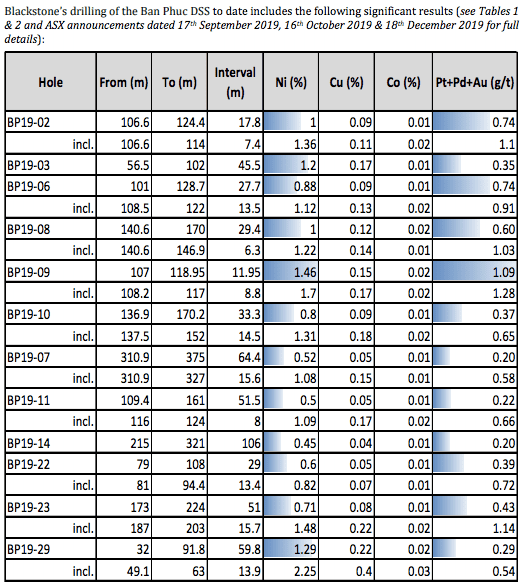 Initial geological modelling of Blackstone’s drilling, combined with over 60,000m in 381 holes drilled by the previous owners of the project, is starting to reveal the potential extents of the Ban Phuc DSS Nickel – PGE deposit (see Figure 1). Currently the disseminated mineralisation has been encountered in drill holes over 1,000m by 500m in area and remains open along strike to the north west and south east and down dip to the north east.

The ultimate geometry of the disseminated Nickel – PGE layers in the deposit are yet to be fully defined by drilling, however the following preliminary observations and interpretations are being used to guide further exploration of the deposit.
▪ The previously reported Blackstone drillhole BP19-03 is now interpreted as an intersection of King Cobra mineralisation which assayed 45m @ 1.2% Nickel from 56m (see ASX announcement dated 6th August 2019 & 17th September 2019 for full details);
▪ The combination of the assay results from holes BP19-03 and BP19-29 and geological observations from recent holes BP20-03 and BP20-04 (see Figure 5), where assays are pending, suggest that KCZ can now be traced in drilling over 200m and is open along strike to the north west and south east (see Figure 1). The KCZ is also open down dip to the north east (see Figures 2 and 3), however it maybe locally closed off near surface in the area of hole BP19-44 by a post mineral fault;
▪ Drilling to date at Ban Phuc has identified two thick, overlying sheet-like zones of disseminated Nickel PGE (Cu Co) mineralisation, the KCZ and the underlying Zone here named the BDZ, are hosted within the Ban Phuc ultramafic intrusive. The KCZ and BDZ converge and dip to the north east.
▪ The KCZ and BDZ appear to have different nickel and PGE contents. KCZ is hosted by a textually distinct phase of the Ban Phuc intrusive with the margins of the KCZ locally marked by an “tremolite” contact zone (see Figure 2) that may define the contact of a distinct phase of the Ban Phuc intrusive body.
▪ Previous interpretations proposed that Ban Phuc mineralisation is a folded sheet-like body that is closed off to the north east. However, an alternate interpretation arising from the recent Blackstone drilling is that the KCZ and BDZ are distinct phases of mineralisation related to different intrusive pulses and that together they vector down dip to the north east toward a potentially higher grade “feeder zone”.
▪ The ‘feeder zone’ target is currently being tested with two rigs that are drilling a series of new holes to test this concept.

Preliminary interpretations and drill results are also revealing several encouraging characteristics (see Figures 2, 3 & 4) that suggest the potential for a large tonnage disseminated sulfide deposit at Ban Phuc. These factors may make the deposit amenable to bulk mining techniques employed at large scale nickel mines in Australia and elsewhere in the world. The Ban Phuc DSS deposit’s characteristics supporting this concept include:

• Thick accumulations of nickel sulfide mineralisation across a significant area of the Ban Phuc ultramafic body (see table above of Blackstone’s drill intersections to date);
• Multiple stacked layers of disseminated mineralisation hosting higher grade intervals;
• King Cobra zone, hosting thick accumulations of nickel sulfide, in the near surface;
• Significant concentrations of precious metals – palladium, platinum and gold – in all drilling to date from the deposit.

Blackstone’s Ta Khoa Nickel–PGE project has a combination of large DSS nickel targets and 25 other prospects (see Figure 7), including multiple high grade massive sulfide vein (MSV) targets of the style that were mined adjacent to the current Ban Phuc DSS drilling. The Ban Phuc Nickel mine operated for 3.5 years between 2013 and 2016, producing 20.7kt Ni, 10.1kt Cu and 0.67kt Co, before closing when the defined mineable reserves were depleted. The high grade Ban Phuc MSV is located less than 50m to the south of the Ban Phuc DSS deposit and remains underexplored at depths below the base of previous mining. Many other MSV targets are within potential trucking distance of the existing
450ktpa Ban Phuc processing facility that was built to international standards, commissioned in 2013, and has been on care and maintenance since 2016.

Blackstone is evaluating near mine MSV and other potential DSS targets for drill testing during the 2020 season, with the concept of identifying high grade and further disseminated mineralisation for either an early restart of the Ban Phuc mining operation, or the potential to blend higher grade MSV mineralisation with the larger tonnage DSS mineralisation for processing.

Blackstone believes that the Ta Khoa project represents a true district scale Nickel-PGE sulfide opportunity of a calibre rarely controlled by a junior company. The project also has significant infrastructure advantages that include the existing 450ktpa processing facility, abundant low cost hydroelectric power, a skilled low-cost labour force, and is located in a country that has become an Asian hub for electronics and battery manufacturing with a growing demand for Nickel Sulfate for EV battery manufacture.

Blackstone looks forward to reporting further results from the King Cobra discovery and the ongoing drill out at Ban Phuc over the coming weeks, as the company advances the exploration and evaluation of this high calibre asset for its shareholders.