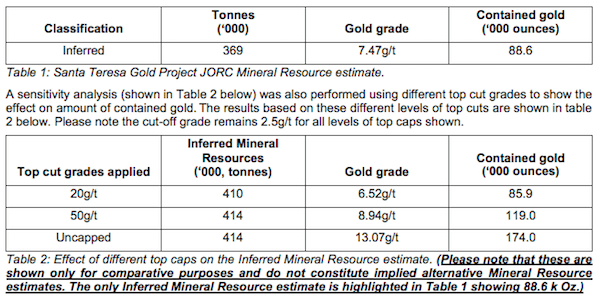 Comet Managing Director, Matthew O’Kane, commented “The initial JORC compliant Resource is the first step for Comet in moving forward with Santa Teresa. Through this process we have increased our understanding of the mineralisation. It is also interesting to see the sensitivity of the resource to different top cap grades. With the Resource being open at depth and along strike, I am confident that we can extend mineralisation with the upcoming drilling.”

The Santa Teresa gold deposit is located within the Peninsular Range of Baja California. The Peninsular
Ranges batholith (large area of intrusive igneous rock) is the southernmost chain of North American Mesozoic
batholiths that extend from Alaska to the southern tip of Baja California.
The deposit is underlain by quartz diorite intrusive rocks cut by a dense swarm of older gabbro and hornblende
porphyry, and younger diabase dykes. The older dykes trend northwest-southeast with dips that are steep to
moderate. The diabase dykes are the youngest set and are consistent in strike and dip averaging 320° and
dipping 55° northeast. The dykes pinch and swell, varying in width from 7 cm to 12 m. The quartz diorite is
white, medium-grained, and contains black hornblende and biotite.

Gold mineralisation at Santa Teresa is within parallel, northwest-trending, southwest dipping to near vertical
mesothermal lode-gold quartz vein systems. The veins range in width from a few cm to about three metres in
width, and up to several hundred metres of known strike length. In general, the quartz veins are narrow,
averaging less than 0.3 m in width, occupying parallel fractures with sheared walls. The veins typically strike
300° and dip southwest 80°. The veins maintain the general trend even where interrupted by pre-mineralisation
dykes. In detail the veins pinch and swell, bend, or split into many stringers.

A second generation of veining followed a fracturing episode and was accompanied by epidote, hornblende
and sparse mineralisation of galena, sphalerite, pyrite, marcasite, pyrrhotite, chalcopyrite, magnetite,
specularite, and native gold. Gold occurs in the quartz veins and in contact with sulphides such as galena,
magnetite, and pyrite.

Mineralisation of the quartz veins/shear zones is stoped out (over-printed) by a series of post-mineralisation
diabase dykes that are interpreted to dip moderately to the north-east. Given the current level of drilling data
it was not possible to accurately model post-mineralisation dykes as 3D wireframes for incorporation into the
geological model. Due to the uncertainty of the position and extent of the post-mineralisation dykes, an
indicator kriging (IK) approach was used to create a localised model of the dykes, which provided a more
accurate amount of tonnage reduction to apply locally. The IK model essentially estimates the proportion of
diabase dyke per block.

Figure 1 and Figure 2 show plan and long section views of the mineralised veins.

Thirty-two HQ sized (63.5 mm diameter) surface diamond drill holes were drilled by Premier Gold Mines Ltd.
(Premier) in 2008. The holes were drilled at various dips towards the north-east, perpendicular to the known
strike of the veins. Core recovery was very good, with the only significant core losses occurring at the surface.
All holes were logged for lithology, alteration and structure, and photographed before sampling.
Sampling was via half-core, longitudinally sawn down-hole. Sample intervals were based on geological
contacts, with the sample length varying between 0.7 m and 3.05 m, with a mean of 1.07 m, however the most
common sample interval for the mineralised shoots was 1 m. Samples were dried prior to preparation and then
crushed to 90% passing 2 mm using a jaw crusher. A rotary splitter was used to obtain 500 gram sub-samples
for pulverizing.

All samples were sent to American Assay Laboratories in Sparks, Nevada, USA. After pulverizing, analysis for
gold was by lead collection fire assay fusion with gravimetric finish. It was recognised that there was significant coarse gold at the property, and consequently all samples with visible gold or galena, and ribbon or banded quartz veins were analysed by 500 gram or 1 kg screen metallic fire assay. The samples submitted for screen
metallic assaying were screened at 106 microns, and the weight of both coarse and fine fractions were
recorded to produce a final weighted average gold assay.

VIDEO — Joe Mazumdar: Copper is the Commodity of the Decade, Ways to Get Exposure