Galan Lithium Limited (ASX: GLN) (Galan or the Company) is pleased to announce that it has completed a review of historical CSIRO data which enhances the prospectivity of its Greenbushes South Lithium project.

Galan reviewed the historical CSIRO data sets of laterite geochemistry (Smith et al. 1987 (*)) along with other geological studies. This CSIRO study defines geochemical anomalies within the laterite soils across the Greenbushes region due to the dispersion minerals and elements during extensive weathering of the mineralized Li-Sn-Ta pegmatites. This study was undertaken before Talison Lithium Pty Ltd’s mine commenced production, when the ore deposit was still concealed. This study confirmed the feasibility to explore for a concealed deposit of this style of mineralisation. Elements such as As, Sn, Be, Sb, Nb, Ta and B were used to define the anomaly and were centred over the deposit. This review was conducted by Galan’s Competent Person, Dr Luke Milan.

Galan will now augment this data set by extending the coverage of soil sampling on from the historical data sets, with a focus on the most anomalous area located to the north east of Greenbushes South holding. Mapping and rock chip sampling will also be undertaken. The objective is to confirm historical data and define extensions of geochemical anomalies and therefore potential mineralisation into Galan’s Greenbushes South tenure. These results would then be used to delineate potential targets for further exploration such as drilling.

Dr Milan said: ‘Historical geochemical assays of pisolitic laterites surrounding the Greenbushes deposit indicate well defined multi element dispersion from the source of the outcropping mineralised pegmatites. By plotting pathfinder elements such as As, Sn, Sb and Ta, the general trend and extent of the anomaly surrounding the deposit can be seen in the figures below. Additional soil sampling within the current holdings is planned to augment the current data set to delineate any potential along strike extension of the Greenbushes deposit to the south

The Greenbushes South Lithium Project (‘the Project’) is located 200 km south of Perth, the capital of Western Australia. With an area of 353 km2 , the Project was originally acquired by Lithium Australia NL due to its proximity to the Greenbushes Lithium Mine (‘Greenbushes’), given that the Project covers the southern strike projection of the geological structure that hosts Greenbushes. The Project area commences approximately 3km south of the Greenbushes open pit mining operations.

Greenbushes is currently the largest hard-rock lithium mine in the world, operated since May 2014 by Talison Lithium Pty Ltd, an incorporated joint venture between Tianqi Lithium Corporation (51%) and Albemarle Corporation (49%). Greenbushes produces a concentrate of the lithium mineral, spodumene, to feed both China and Western Australian based mineral conversion plants or consumers of spodumene concentrates in Europe, North America and China. Australian mining company IGO Limited recently signed a deal to acquire a 24.99% stake in Greenbushes from Tianqi Lithium Corporation.

Reports of work by earlier explorers within the Project record the presence of pegmatites – a rock type that may host spodumene – and so provides immediate exploration targets. Much of this earlier work focused on the discovery of the minerals cassiterite (tin) and tantalite (tantalum), as Greenbushes was at different times mined for these minerals before spodumene (lithium) became the major driver of revenue. 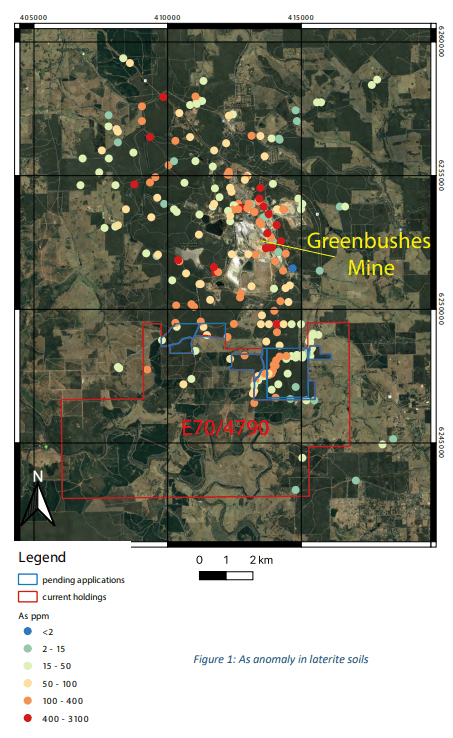 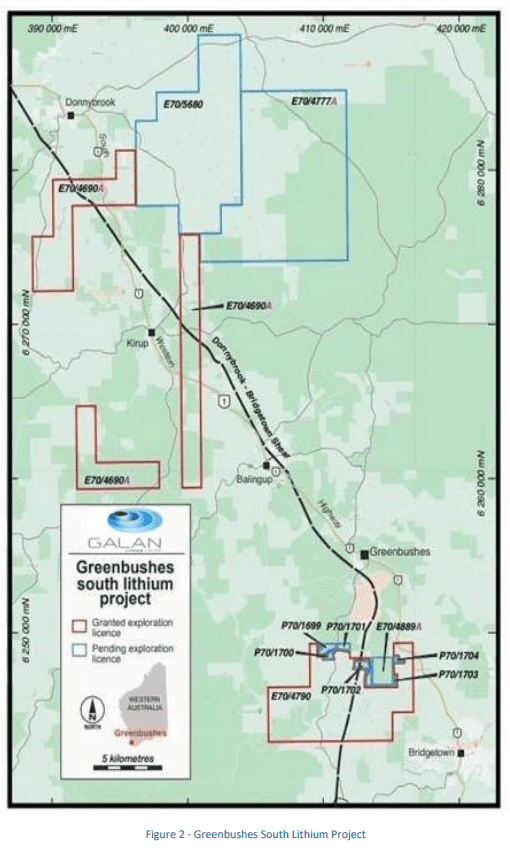 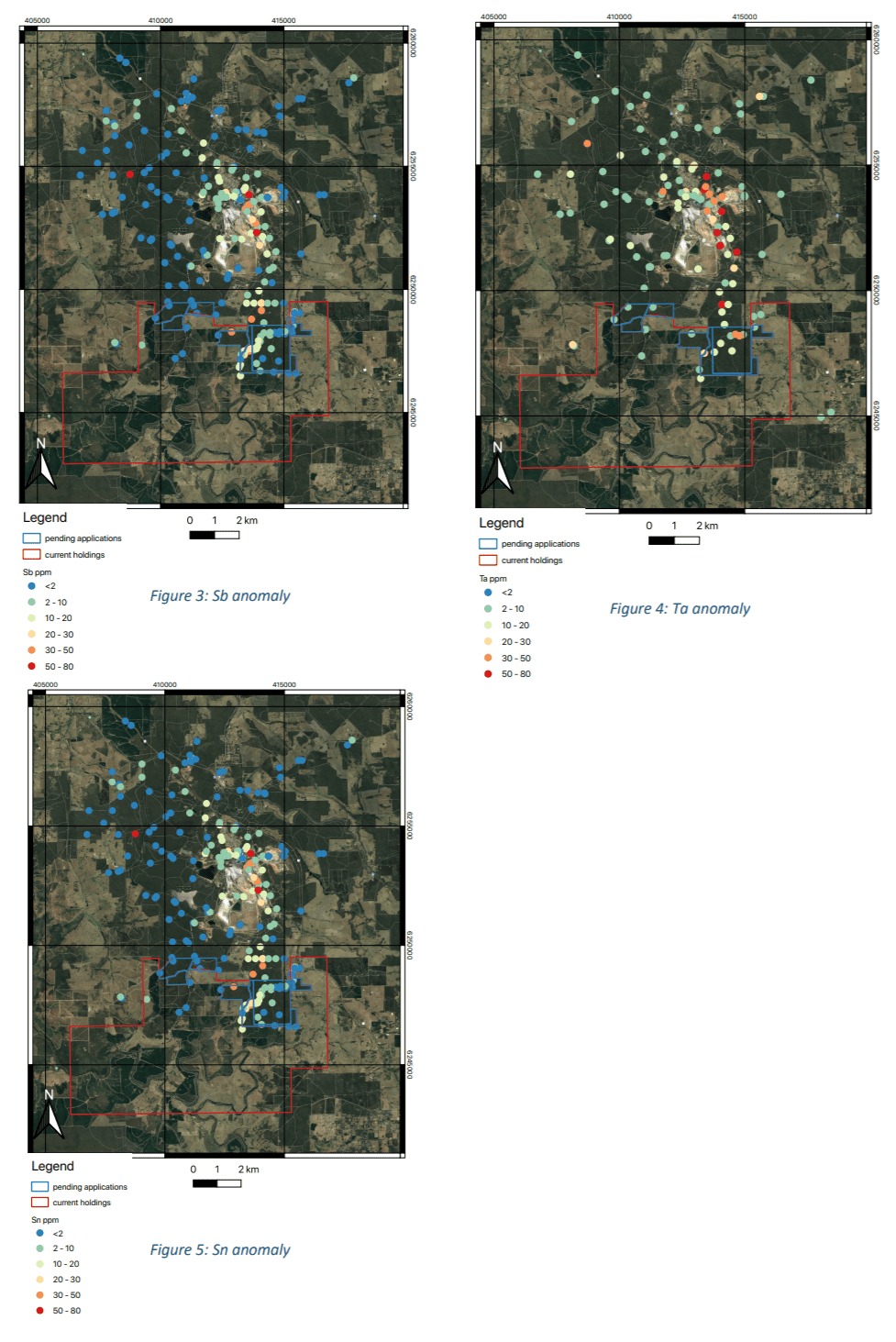 The Galan Board has authorised this release.

Galan is an ASX listed company exploring for lithium brines within South America’s Lithium Triangle on the Hombre Muerto salar in Argentina. Hombre Muerto is proven to host the highest grade and lowest impurity levels within Argentina and is home to Livent Corporation’s El Fenix operation and Galaxy Resources and POSCO’s Sal de Vida projects.

Candelas: a ~15km long by 3-5km wide valley filled channel which project geophysics and drilling have indicated the potential to host a substantial volume of brine and over which a maiden resource estimated 685kt LCE (Oct 2019). Furthermore, Candelas has the potential to provide a substantial amount of processing water by treating its low-grade brines with reverse osmosis, this is without using surface river water from Los Patos River.

Hombre Muerto West (HMW): a ~14km by 1-5km region on the west coast of Hombre Muerto salar neighbouring Livent Corp to the east. HMW is currently comprised of seven concessions – Pata Pila, Rana de Sal, Deceo III, Del Condor, Pucara, Catalina and Santa Barbara. Geophysics and drilling at HMW demonstrated a significant potential of a deep basin. In March 2020, a maiden resource estimate delivered 1.1Mt of LCE for two of the largest concessions (Pata Pila and Rana de Sal). That resource now sits at 2.3Mt of LCE with exploration upside remaining for the rest of the HMW concessions not included in the current indicated resource.

Greenbushes South Lithium Project: Galan has an Exploration Licence application (E70/4629) covering a total area of approximately 43 km2. It is approximately 15kms to the south of the Greenbushes mine. In January 2021, Galan entered into a sale and joint venture with Lithium Australia NL for an 80% interest in the Greenbushes South Lithium project, which is located 200 km south of Perth, the capital of Western Australia. With an area of 353 km2, the project was originally acquired by Lithium Australia NL due to its proximity to the Greenbushes Lithium Mine (‘Greenbushes’), given that the project covers the southern strike projection of the geological structure that hosts Greenbushes. The project area commences about 3km south of the current Greenbushes open pit mining operations.

The information contained herein that relates to exploration results and geology is based on information compiled or reviewed by Dr Luke Milan, who has consulted to the Company. Dr Milan is a Member of the Australasian Institute of Mining and Metallurgy and has sufficient experience which is relevant to the style of mineralisation and types of deposit under consideration and to the activity which they are undertaking to qualify as a Competent Persons as defined in the 2012 Edition of the ‘Australasian Code for Reporting of Exploration Results, Mineral Resources and Ore Reserves’. Dr Milan consents to the inclusion of his name in the matters based on the information in the form and context in which it appears.