Challenger Exploration (ASX: CEL)(“CEL” the “Company”) is pleased to announce results from the next three drill holes CVDD-22-003 to CVDD-22-005 in the Colorado V concession in El Oro Province, Ecuador, where the Company is farming in to earn an initial 50% interest.

“These next three holes from Colorado V confirm that we have made two significant discoveries at Colorado V. The intersections significantly extend the mineralisation in the discovery holes at the CV-A and CV-B anomalies both of which are just a few kilometres on strike from the 22-million ounce Cangrejos Gold Project1. The anomalies have the same geology and surface footprint as Cangrejos and drilling is showing us they have similar mineralisation.

We have drilled five of fifteen regional gold-soil anomalies and all five have returned significant mineralisation. The results continue to crystalise our strategy that our high-grade resource of 1.1 million ounces at 5.6 g/t gold equivalent in Argentina, which is continuing to grow, will fund a large bulk gold discovery in Ecuador." 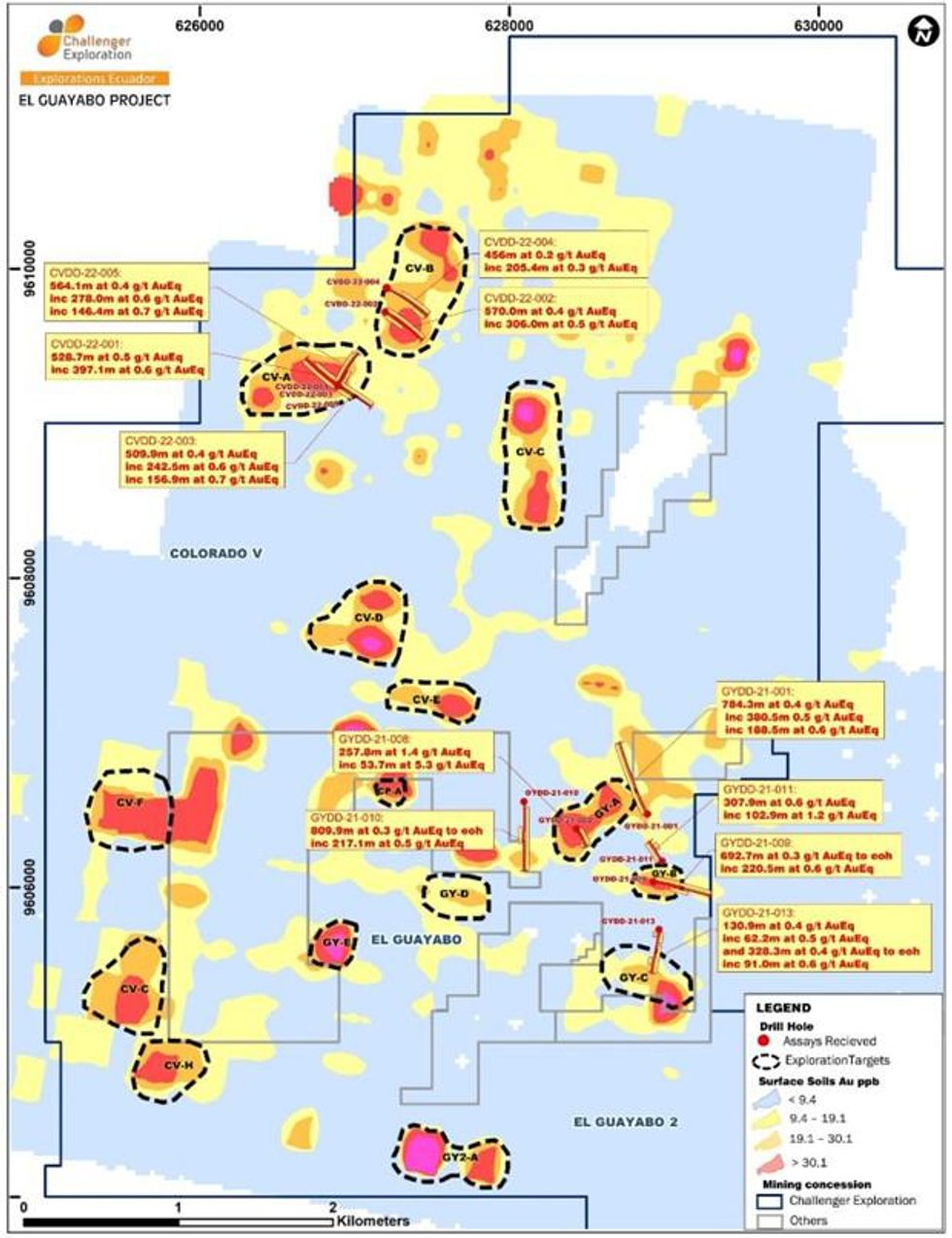 The new discoveries have significant scale with both the CV-A and CV-B Au-soil anomalies 1 kilometre long and 500 metres wide. The Colorado V concession adjoins CEL's 100% owned El Guayabo concession to the south and the Cangrejos concession to the north which hosts the 22-million ounce Cangrejos Gold Project1.

As can be seen from Figure 2 (Plan view) CVDD-22-003 drilled outside the projected CV-A soil anomaly at approximately 200 metres down hole. This makes the intercept of 509.9m at 0.4 g/t AuEq (0.2 g/t gold, 1.4 g/t silver, 0.1 % copper, 31.3 ppm molybdenum) from surface until the end of the hole more impressive as it confirms that the mineralisation extends significantly beyond the boundary of the CV-A soil anomaly.

The intersection confirms that the CV-A soil anomaly which is a gold, silver, and copper soil anomaly some 1 kilometre long and 500 metres wide is mineralised across its entire 500 metre width and beyond. The mineralisation is consistent and pervasive throughout the hole and appears to have similar paragenetic relationships to mineralisation intersected in the discovery holes 3 kilometres to the south at El Guayabo, as well as Lumina Gold's Cangrejos Project 6 kilometres to the northeast.

This article includes content from Challenger Exploration (ASX: CEL), licensed for the purpose of publishing on Investing News Australia. This article does not constitute financial product advice. It is your responsibility to perform proper due diligence before acting upon any information provided here. Please refer to our full disclaimer here.