Tempus Resources Ltd (“Tempus” or “the Company” ) (ASX:TMR)(TSX.V:TMRR)(OTCQB:TMRFF) is pleased to announce the results of a consolidated metallurgical review completed by JDS Energy & Mining Inc. (“JDS Mining”). The review focussed on the options for processing Elizabeth ore based on the results of a metallurgical test work program completed by G&T Metallurgical Services Ltd. (“G&T Met”) in 2009-2010 at their laboratories in Kamloops, British Columbia

Tempus President and CEO, Jason Bahnsen, commented “The review work completed by JDS Mining provides further confidence regarding the free milling characteristics of the Elizabeth ore and the value of our existing process plant at Blackdome. As we continue to drill Elizabeth, we will concurrently be progressing the planning and engineering work that will lead to the completion of a Scoping Study / Preliminary Economic Assessment on the project following the release of a maiden Mineral Resource estimate under Tempus’ ownership.”

JDS Mining was appointed to consolidate and complete a review of the historical metallurgical work that has been completed on Elizabeth mineralised material and outline the potential options for future processing of ore from the project. The JDS Mining review was primarily based on test work performed by G&T Met in for J-Pacific gold Inc., a previous owner of the Elizabeth Project.

The objective of the G&T Met testwork was to conduct a preliminary metallurgical assessment of a sample from the Elizabeth Gold Project and determine the suitability of two main processing options, which were:

Composite samples received by G&T Met for their test work program were approximately 21 kilograms from drill core from the South Vein (assaying at 3.95g/t gold and 2.1g/t silver) and approximately 37 kilograms from chip samples from the West Vein (assaying at 0.49g/t gold and 1.0g/t silver). However, it was determined that the assays received from the West Vein were too low grade (not typical of Elizabeth material) and that was excluded from the test program and only used for calibrations when preparing tests for the South Vein composite.

Five gravity and flotation tests were conducted to mimic the conditions that would be found in the
Blackdome mill (Tests 1-4 and Test 6). The flotation residence time used was 8 minutes for all of the flotation tests and the reagent scheme employed was methyl isobutyl carbinol (MIBC) as frother and potassium amyl xanthate (PAX) as collector, ie a common flotation reagent scheme and the same as used historically in the Blackdome mill. The tests were conducted following crushing and grinding to a grind size of 120 µm. All 3 tests that included both gravity and flotation after basic crushing and grinding in the flowsheet achieved total gold recoveries of 92.5 to 95.1% (see Tests 3, 4 and 6 in Table 1 below).

Leaching tests were also carried out on the Elizabeth samples to determine the leaching characteristics of the Elizabeth ore through a typical cyanide leach process to simulate the carbon-in-leach / carbon-in-pulp process. This test, Test 5 took the ‘whole rock’ output material following the gravity only test (Test 2) and leached it with sodium cyanide at a concentration of 1,000 ppm over a retention time of up to 48-hours. The results from this test indicate that 87.5% of the remaining gold in the sample was able to be dissolved in cyanide, suggesting a total gold recovery of 94.7% (the silver recovery was not measured in this test). The cyanide consumption was quite low at 0.44kg/tonne .

In their report, Review of Metallurgical Testwork on the Elizabeth Deposit, dated July 9. 2021, JDS Mining concluded:

“The excellent results for both flotation and leaching demonstrate that the Elizabeth ore is not refractory.”

“The Elizabeth ore and Blackdome ore appear to both contain most of the gold as free particles that are easily liberated and recovered by both flotation or cyanidation. It is JDS’ opinion that processing of these two ores together will not cause a reduction in recovery.”

“It is JDS’ opinion that the Blackdome Mill will be suitable for processing the ore from the Elizabeth deposit, with a few modifications (replace current jigs with centrifugal concentrators, add additional rougher flotation cells to the circuit).”

“The flotation concentrate produced from the Elizabeth ore will be a desirable concentrate
for smelters to purchase.”

“The testwork that has been conducted in 2010 could be considered adequate for a revised PEA unless recent drilling results indicate that the mineralogy, primarily the gold deportment, is significantly different from the samples tested in 2010.”

JDS Mining has recommended some further metallurgical and engineering study work to be completed as part of a forthcoming Preliminary Economic Assessment (“PEA”) on the project. The recommended study work includes:

The Elizabeth Gold Project is the Flagship Project for Tempus Resources and is located in the Bralorne – Pioneer Gold District of southern British Columbia (see Figure 1). The 115km 2 project is a relatively underexplored high-grade mesothermal gold mineralisation presenting itself in relatively wide (typically ~1-5m wide) vein sets (see Figure 2). The high-grade quartz veins encountered in the 2020 drilling at Elizabeth show close geological similarities to the Bralorne mesothermal vein system which has been mined to a depth of approximately 2,000 metres from surface and suggests there is strong potential to extend the mineralisation down plunge from the current deepest intersections that are approximately 200 metres below surface.

Tempus began drilling the Elizabeth Project in 2020, releasing initial results on 8 February 2021 that included hole EZ-20-06 which intersected 5.0m at 61.3g/t gold from 116.5m, including 1.5m at 186.0g/t gold from 118.0m. Drilling is ongoing with 8 holes (for approximately 1,800 metres) completed so far since drilling recommenced on 5 June this year. The core samples for the first 4 holes were dispatched to SGS Laboratories in Vancouver for assay on 24 June. Assay results have taken longer than previously guided by the lab. However, latest guidance indicates that they are expected to be received by the end of July.

In the meantime, raw data has also now been received from the airborne magnetic survey covering the whole 115km 2 Elizabeth Project licence area ( see Tempus ASX announcement of 3 June 2021 ). That data is now being processed and reviewed by the Company’s third-party geophysics service provider and the results of their work is expected to be announced in coming weeks.

The airborne magnetic survey will assist in identifying the full extent of Blue Creek Porphyry (host to the high-grade quartz gold mesothermal veins at Elizabeth) beyond its current known extent and surface expression where it is cover by overburden. The magnetic and radiometric expression of the Blue Creek porphyry/Elizabeth Deposit will also be useful in identifying additional exploration targets, potentially similar to Elizabeth, in the license area.

The Elizabeth Project is joined by a contiguous group of mineral claims to the Blackdome Gold Mine approximately 30 km to the north, including claims covering a potential haul road route between the projects.

The existing process plant at Blackdome consists of a crushing and grinding circuit followed by gravity gold recovery using shaker tables and flotation. The Blackdome process plant has been on care and maintenance since 1991. (see Figure 3)

The Blackdome mill and associated tailings impoundment facility are fully permitted. Tempus owns 100% of both the Elizabeth Gold Project and the Blackdome Gold Mine. 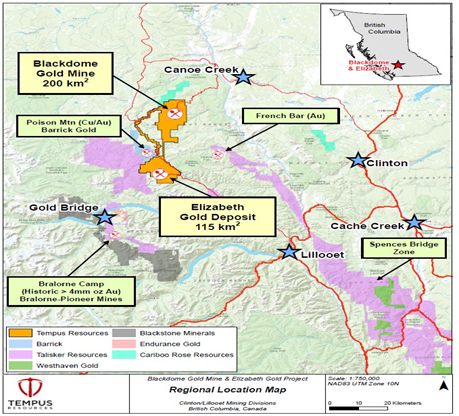 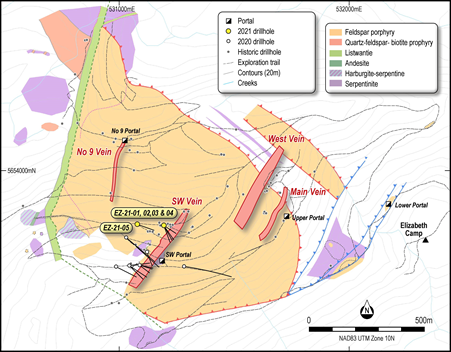 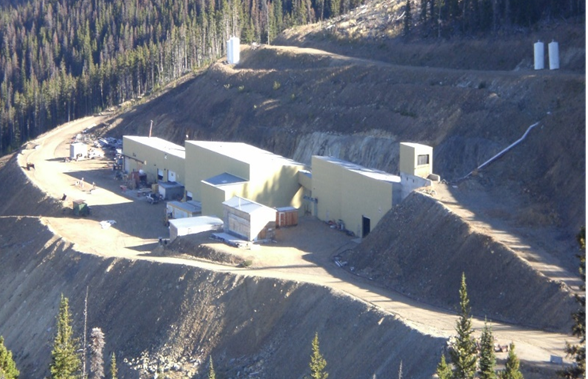 This announcement has been authorised by the Board of Directors of Tempus Resources Limited.

Information in this report relating to Exploration Results is based on information reviewed by Mr. Kevin Piepgrass, who is a Member of the Association of Professional Engineers and Geoscientists of the province of BC (APEGBC), which is a recognised Professional Organisation (RPO), and an employee of Tempus Resources. Mr. Piepgrass has sufficient experience which is relevant to the style of mineralisation and type of deposit under consideration and to the activity which he is undertaking to qualify as a Competent Person as defined by the 2012 Edition of the Australasian Code for reporting of Exploration Results, Mineral Resources and Ore Reserves, and as a Qualified Person for the purposes of NI43-101. Mr. Piepgrass consents to the inclusion of the data in the form and context in which it appears.

Tempus Resources Ltd (“Tempus”) is a growth orientated gold exploration company listed on ASX (“TMR”) and TSX.V (“TMRR”) and OTCQB (“TMRFF”) stock exchanges. Tempus is actively exploring projects located in Canada and Ecuador. The flagship project for Tempus is the Blackdome-Elizabeth Project, a high grade gold past producing project located in Southern British Columbia. Tempus is currently midway through a drill program at Blackdome-Elizabeth that will form the basis of an updated NI43-101/JORC resource estimate. The second key group of projects for Tempus are the Rio Zarza and Valle del Tigre projects located in south east Ecuador. The Rio Zarza project is located adjacent to Lundin Gold’s Fruta del Norte project. The Valle del Tigre project is currently subject to a sampling program to develop anomalies identified through geophysical work.

VIDEO — Andy Schectman: How a Great Reset Happens and What it Means for Gold