The Directors of eMetals Limited (ASX:EMT) (eMETALS) (Company), are pleased to announce results from reconnaissance stream sediment sampling at the Nardoo Well Project in the Gascoyne Region of Western Australia.

“These results are highly encouraging and far exceed thresholds recorded by previous explorers. The presence of extremely anomalous niobium and tin within the Nardoo East area is unexpected but extremely exciting and demonstrates the potential of the entire Project area.”

A total of 121, -115 mesh stream sediment samples were taken from third-order streams in two areas of the tenement (figure 2), at Nardoo Hill East and Beryl Well. 26 rock chip samples were also collected. Nardoo Hill East is proximal to an occurrence of tungsten mineralization identified in 1981 by Whim Creek Consolidated, and the area at Beryl Well lies immediately west of the tenement boundary between E09/2114 and E09/2156 which (prior to acquisition of the tenure from VMC Limited) was the limit of EMT’s tenure. 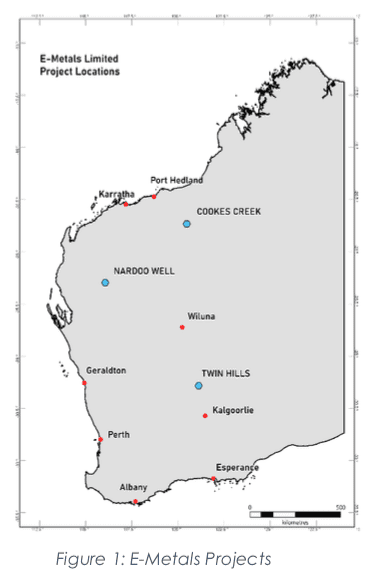 E09/2156 overlies the historical Nardoo Hill & Morrissey Hill workings, in a pelitic and gneissic terrain that has been extensively intruded by pegmatites, which host tantalum-lithium-niobium mineralization. The acquisition of E09/2156 has expanded the tenement position to include areas which were identified as prospective for niobium, tantalum and rare earth element pegmatites (Nb- Ta-REE) as detailed in the Company ASX Announcement on 09 March 2020.

Pursuant to the binding term sheet (Term Sheet) announced to the ASX on 27 March 2018, activities to meet expenditure commitments on the tenure were undertaken. The work undertaken was in line with statutory requirements to maintain expenditure on the tenements and submit compliance reports to the Mines Department.

A comprehensive project review of historical exploration activities on the Nardoo Well tenement is being undertaken, which involves compiling historical WAMEX reports into a GIS database. eMetals has engaged Gneiss to undertake field mapping, prospecting and a structural study aimed at confirming the mineralisation and producing an exploration program for 2020. 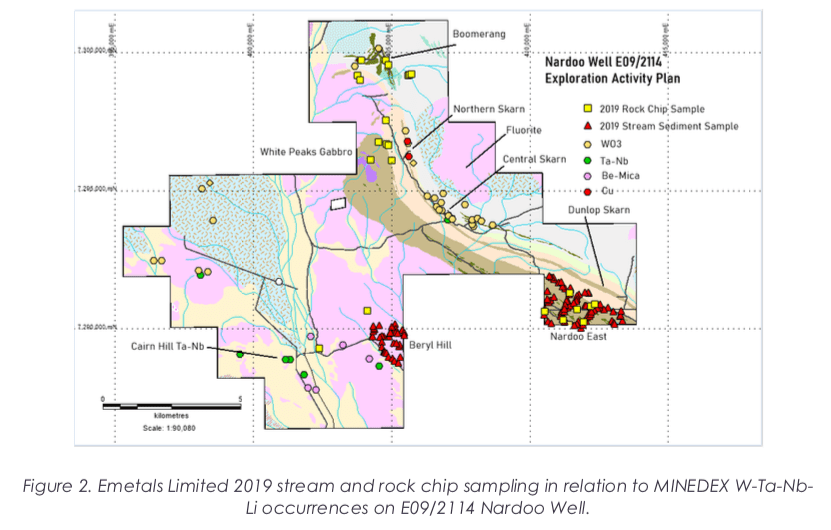 Nardoo East
The Nardoo East area sampling has identified a significant area of anomalous stream sediments along a 3 kilometre section of the prospective staurolite schist (Leake Springs Metamorphics) which contains amphibolites which are a potential host to tungsten mineralization. The Nardoo East area includes stream sample points including:

Anomalies appear associated with quartz scree in the regolith, which likely represent material sourced from pegmatites. Pegmatite has been mapped in the area and pegmatite samples returned Nb-Ta enrichments up to 177ppm Ta.

Refer to Appendix 1 and Appendix 2 for full results. 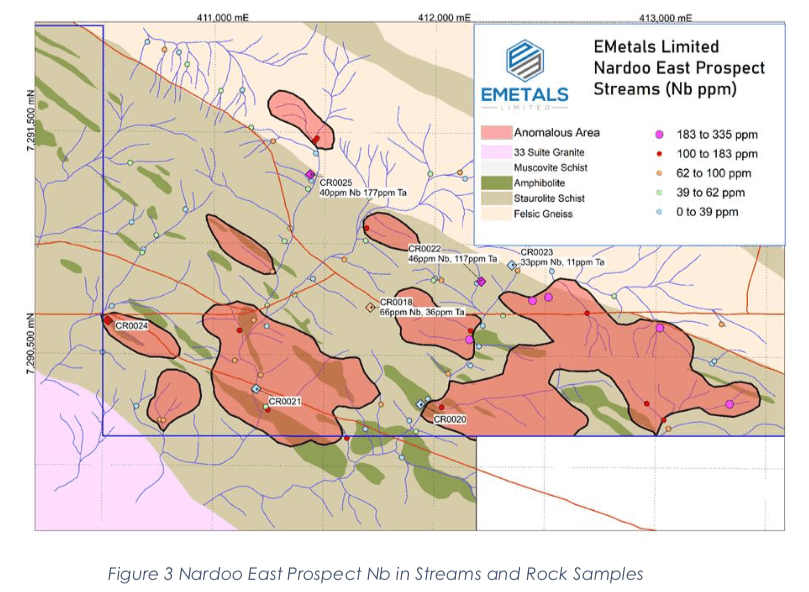 An area immediately west of the Beryl Well pegmatite outcrop was sampled in 2019, separate to and prior to the deal undertaken with Venus Metals Corporation Limited to acquire E09/2156. The stream sediment sampling at Beryl Well was undertaken to test for extensions of the pegmatite on E09/2114 Nardoo Well. 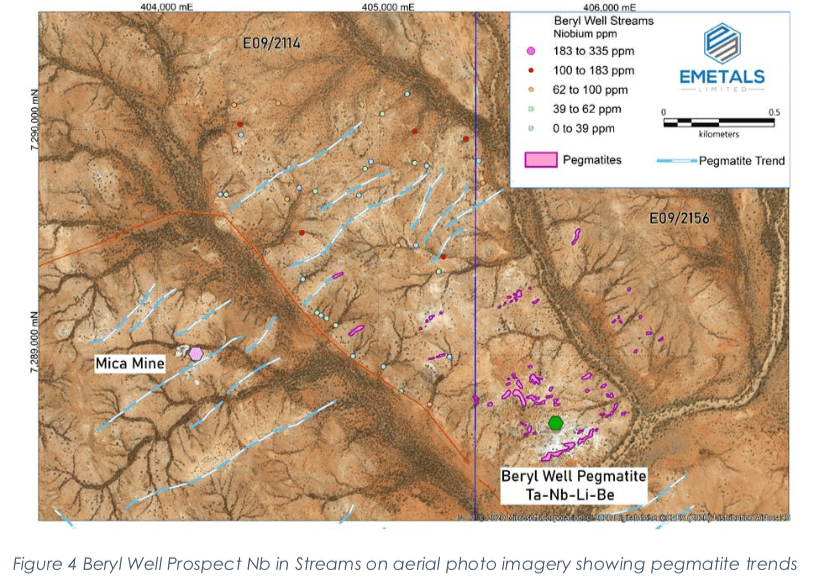 These anomalous results exceed the previous tungsten anomaly thresholds from Mincor Resources’ 2006 stream sediment sampling, which led Mincor to the outcropping skarn mineralization primarily via the use of UV night lamping, rock chip sampling and mapping.

The current stream sediment sampling results at Nardoo East are interpreted to reflect a source of mineralization within the catchments that will be the subject of further exploration work such as infill soil sampling, rock chip sampling and UV lamping.

Lack of lithium anomalism in the streams is not considered particularly discouraging, as lithium is highly mobile within sediments and readily diluted. Further work is required to understand the presence of tin anomalies and confirm the tenor of these anomalies.

The source of anomalism is unknown at this stage, but the association of Sn-W-Nb-Ta-Ce-La appears to be of a similar association to granitic and/or pegmatitic rare metals.

Pegmatites have been mapped extensively within the felsic gneiss units and along the contacts of the Leake Springs Metamorphics.

The company is re-submitting the soil samples for Rare Earth Element (REE) characterization, to assess the nature of REE enrichments, and is planning an expanded stream sediment sampling, rock chipping and mapping program to follow up on the highly encouraging results at the Nardoo East Prospect and Beryl Well. Considerable additional target zones remain to be explored within the Nardoo Well Project. 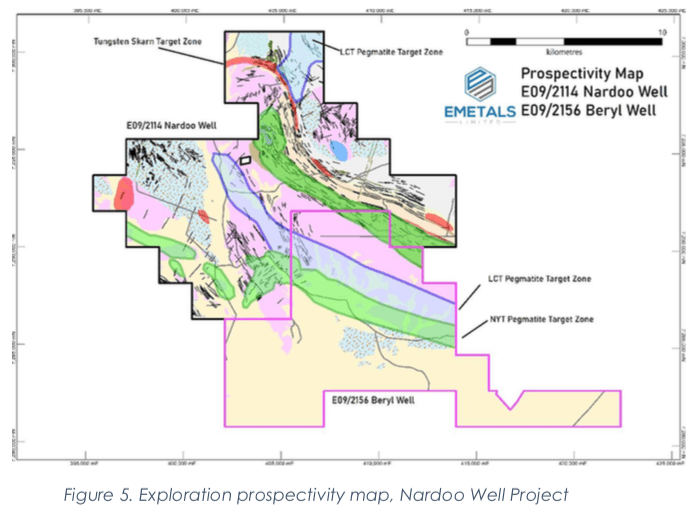 EMT has begun planning a diamond drilling program to twin historical RC holes at the Nardoo tungsten skarn. The objective of this drilling will be to assess whether the strongly mineralised outcrop persists at depth, gain structural information, and confirm that diamond core provides more accurate sampling of mineralisation.

The Company has begun the process of engaging with Native Title holders and pastoralists. A Program of Works was submitted and approved during the March Quarter. Required native title heritage surveys were scheduled to occur but have been delayed due to travel restrictions imposed by the State Government in response to the COVID-19 pandemic.

This announcement has been authorised by the board of eMetals Limited.

For, and on behalf of, the Board of the Company
Mathew Walker
Director

Shareholders and other interested parties can speak to Mr Sonu Cheema if they have any queries in relation to this announcement: +618 6489 1600.

The information in this announcement that relates to Exploration Results is based on and fairly represents information and supporting documentation prepared by Mr Roland Gotthard. Mr Gotthard is a consultant geologist for eMetals and a member of the Australian Institute of Mining and Metallurgy. Mr Gotthard has sufficient experience relevant to the styles of mineralisation and types of deposits which are covered in this announcement and to the activity which they are undertaking to qualify as a Competent Person as defined in the 2012 edition of the ‘Australasian Code for Reporting of Exploration Results, Mineral Resources and Ore Reserves’ (“JORC Code”). Mr Govey consents to the inclusion in this announcement of the matters based on his information in the form and context in which it appears.

VIDEO — Joe Mazumdar: Copper is the Commodity of the Decade, Ways to Get Exposure