Lake Resources NL (ASX: LKE) announced today high-grade final results from its 100% owned Cauchari Lithium Brine Project which confirm a significant discovery, interpreted as an extension to the world-class neighbouring project moving to production next year in the heart of the Lithium Triangle.

Lake Resources NL (ASX:LKE) announced today high-grade final results from its 100% owned Cauchari Lithium Brine Project which confirm a significant discovery, interpreted as an extension to the world-class neighbouring project moving to production next year in the heart of the Lithium Triangle.

The high-grade results averaged* 493 mg/L lithium over 343m (from 117m to 460m), up to 540 mg/L, with a Li/Mg ratio of 2.9. These results are similar to the adjoining major Cauchari project of Ganfeng/Lithium Americas (NYSE:LAC) which has a Measured and Indicated Resource of 17.9Mt LCE at 581 mg/L lithium (Apr 2019 NI 43- 101) (1 ). Lake’s results lead to an interpretation of an extension of the adjoining project, with a marginal difference in grade, in the same basin (refer table below with the range of lithium grades and intervals).

Brines were intersected over 506m from 102m to 608m. Lower flow rates below 465m depth led to the hole being completed at 608m. A test sample of almost the entire hole averaged 444 mg/L lithium over 476m from 132m down to 608m. The drillhole has had slotted casing installed to allow for future testing.

Lake’s Managing Director Steve Promnitz commented: “Independent assays and detailed sampling from Lake’s Cauchari drilling has conclusively demonstrated it is an extension to the adjoining large resources – a project with the world’s largest defined lithium brine resource. We are in the same basin and confident of growing the project with further drilling given we have a 7km strip along the salt lake. The approach to drill brines under alluvial cover around a salt lake has been proven and we aim to repeat that approach at our Olaroz project.

“This boosts confidence in the planned drilling being prepared at our 100% owned Olaroz Lithium Brine Project, with the goal of extending the brines that hosts current production by Orocobre (ASX.ORE). Olaroz has the potential to be another standalone project, with Lake aiming to have three defined lithium brine projects in the heart of the Lithium Triangle from where low-cost lithium production comes. Significantly for investors, major Chinese producer Ganfeng Lithium invested a combined US$397 million to acquire a 50% stake in its Cauchari project, demonstrating the value of such large, low cost lithium brine producing projects. Our discussions continue with potential development partners for our 100% owned Kachi Lithium Brine Project where a prefeasibility study is underway together with a pilot plant.”

“Meanwhile, analysts including the Australian government forecaster, Benchmark Mineral Intelligence and Wood Mackenzie are all pointing to a looming supply deficit for lithium by the early to mid-2020s, while automakers continue to ramp up planned electric vehicle output. Investors that focus on the near-term market opportunity will be rewarded, particularly those projects that can benefit from the world’s lowest cost lithium production.” 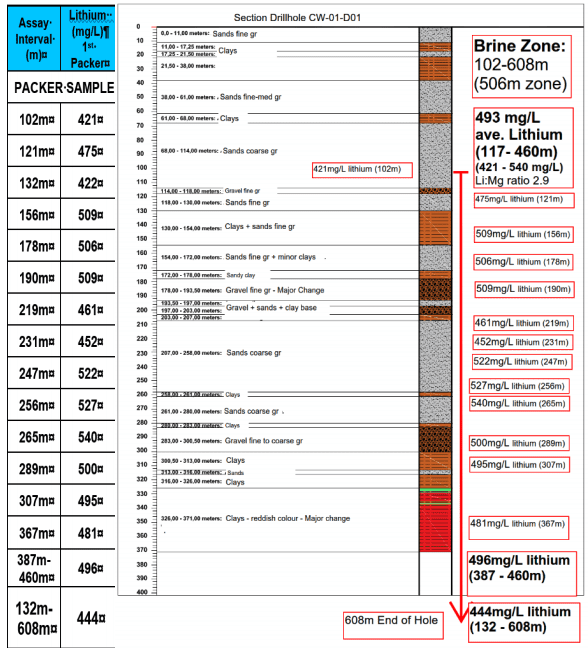 Fig 1: Summary lithium results/intervals with updated section from the drillhole at Cauchari with 506m brine zone.

Footnotes: (*) Arithmetic average of values across interval without consideration of total interval. Averagetotal interval values may change on future pump tests. (*1): Cauchari-Olaroz Mineral Resource Statement of Lithium Americas/Ganfeng joint venture in a NI 43-101 Technical Report filed 1 April 2019 on the TSX-V, prepared by Ernest Burga (P.Eng), David Burga (P.Geo), Wayne Genck (P.Eng) and Daniel Weber (P.G., RM-SME) each of whom is a qualified person for the purposes of NI 43-101, available publicly on SEDAR. 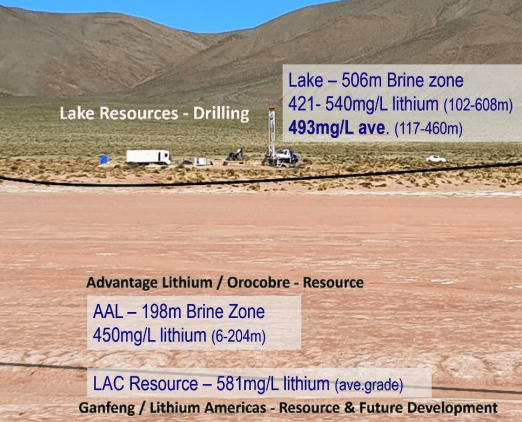 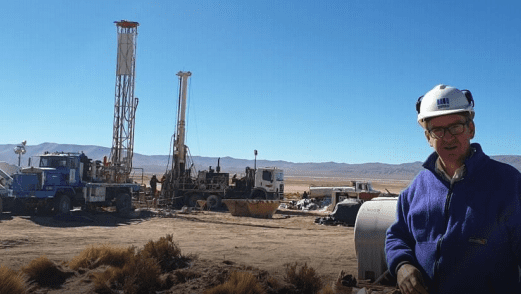 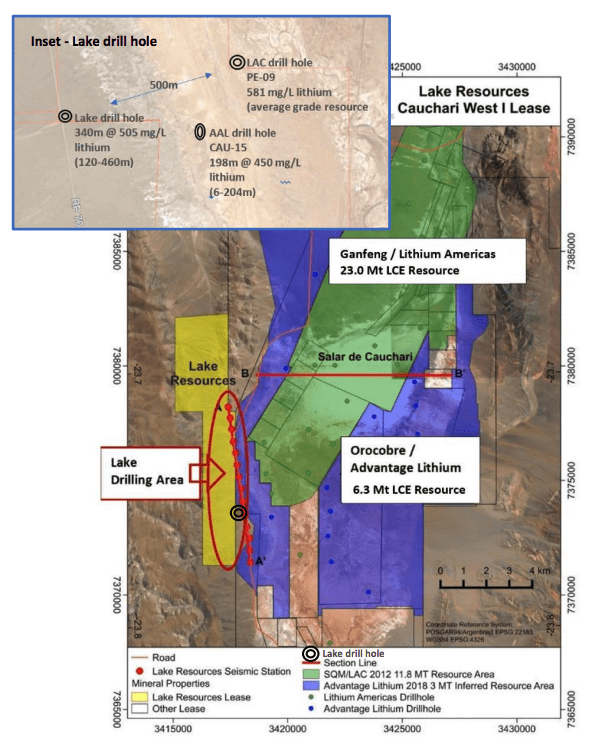 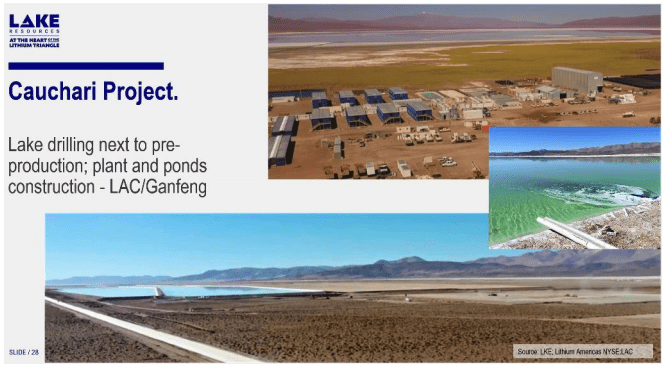 Competent Person’s Statement – Kachi Lithium Brine Project The information contained in this ASX release relating to Exploration Results has been compiled by Mr Andrew Fulton. Mr Fulton is a Hydrogeologist and a Member of the Australian Institute of Geoscientists and the Association of Hydrogeologists. Mr Fulton has sufficient experience that is relevant to the style of mineralisation and type of deposit under consideration and to the activity being undertaken to qualify as a competent person as defined in the 2012 edition of the Australasian Code for Reporting of Exploration Results, Mineral Resources and Ore Reserves. Andrew Fulton is an employee of Groundwater Exploration Services Pty Ltd and an independent consultant to Lake Resources NL. Mr Fulton consents to the inclusion in this announcement of this information in the form and context in which it appears.

About Lake Resources NL (ASX:LKE) Lake Resources NL (ASX:LKE, Lake) is a lithium exploration and development company focused on developing its three lithium brine projects and hard rock project in Argentina, all owned 100%. The leases are in a prime location among the lithium sector’s largest players within the Lithium Triangle, where half of the world’s lithium is produced. Lake holds one of the largest lithium tenement packages in Argentina (~200,000Ha) secured in 2016 prior to a significant ‘rush’ by major companies. The large holdings provide the potential to provide consistent security of supply, scalable as required, which is demanded by battery makers and electric vehicle manufacturers.

A direct extraction technique is being tested in partnership with Lilac Solutions, which has shown 80-90% recoveries and lithium brine concentrations over 50,000 mg/L lithium. Phase 1 Engineering Study results have shown operating costs forecast at US$2600/t LCE in the lowest cost quartile (refer ASX announcement 10 December 2018). This process is will be trialed on site with a pilot plant in tandem with conventional methods as part of the PFS underway, ready by year end. Discussions are advanced with downstream entities, mainly battery makers, to jointly develop the project.

The Olaroz-Cauchari and Paso brine projects are located adjacent to major world class brine projects either in production or being developed in the highly prospective Jujuy Province. The Olaroz-Cauchari project is located in the same basin as Orocobre’s Olaroz lithium production and adjoins Ganfeng Lithium/Lithium Americas Cauchari project, with high grade lithium (600 mg/L) with high flow rates drilled immediately across the lease boundary.

The Cauchari project has shown lithium brines over 506m interval with high grades averaging 493 mg/L lithium (117-460m) and high flow rates, with up to 540 mg/L lithium. These results are similar to lithium brines in adjoining pre-production areas under development and infer an extension and continuity of these brines into Lake’s leases(refer ASX announcements 28 May, 12 June 2019). The Olaroz project is planned to be drilled for the first time in LKE’s 100% owned Olaroz leases as soon as drilling is completed at Cauchari.

Significant corporate transactions continue in adjacent leases with development of Ganfeng Lithium/Lithium Americas Cauchari project with Ganfeng announcing a US$237 million for 37% of the Cauchari project previously held by SQM, followed by a further US$160 million to increase Ganfeng’s equity position to 50% on 1 April 2019, together with a resource that had doubled to be the largest on the planet. Ganfeng then announced a 10 year lithium supply agreement with Volkswagen on 5 April 2019. Nearby projects of Lithium X were acquired via a takeover offer of C$265 million completed March 2018. The northern half of Galaxy’s Sal de Vida resource was purchased for US$280 million by POSCO in June-Dec 2018. LSC Lithium was acquired in Jan-Mar 2019 for C$111 million by a mid-tier oil & gas company with a resource size half of Kachi. These transactions imply an acquisition cost of US$55-110 million per 1 million tonnes of lithium carbonate equivalent (LCE) in resources. 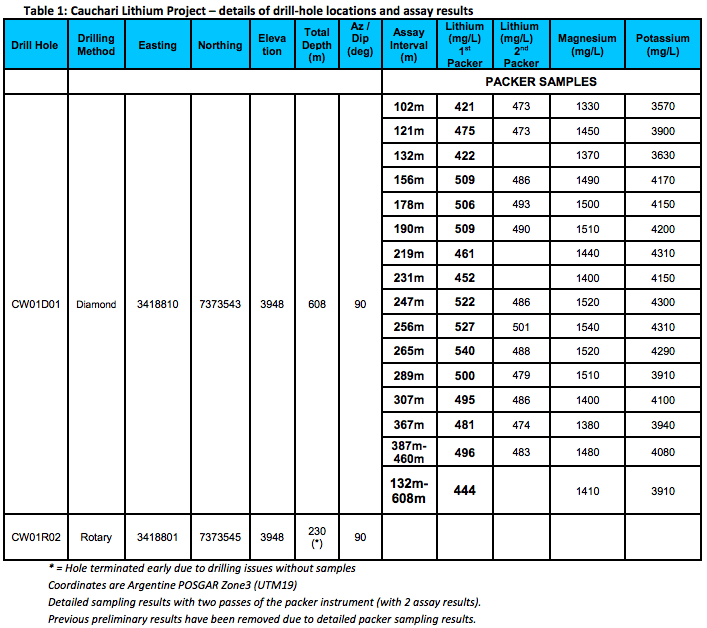 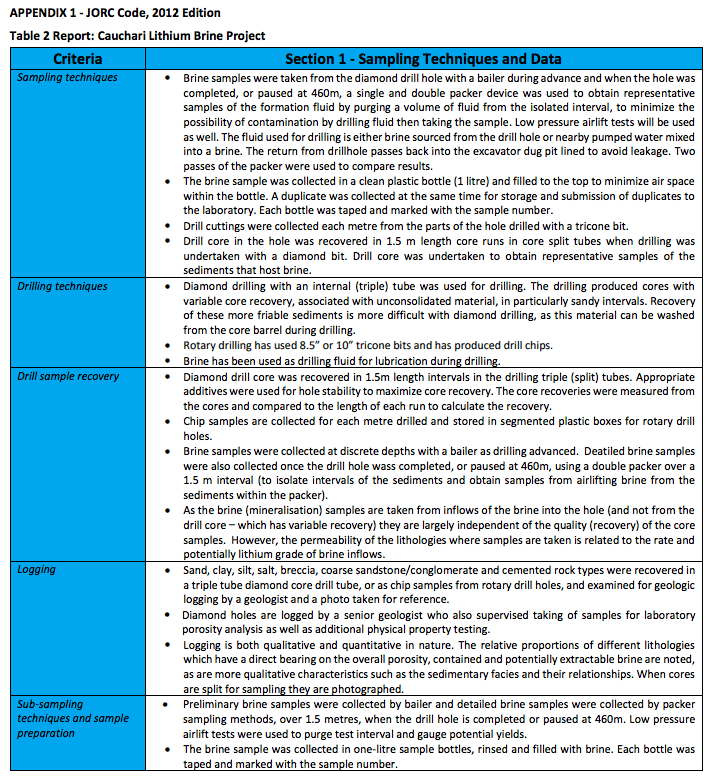 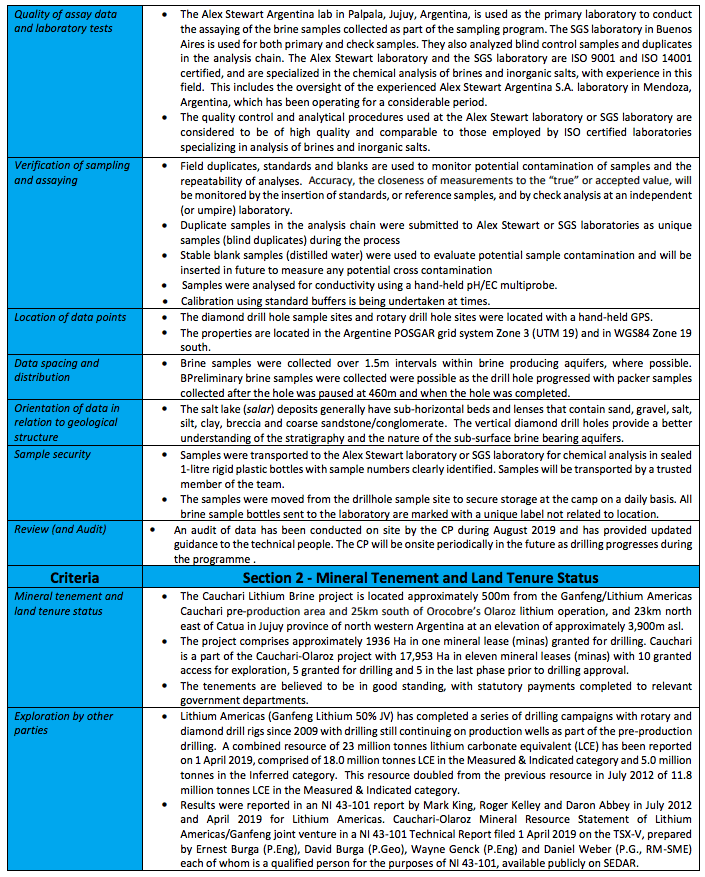 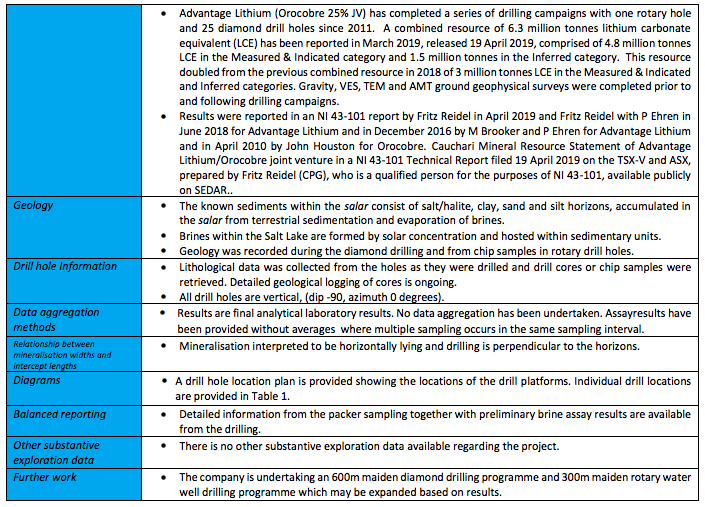 Click here to connect with Lake Resources NL (ASX:LKE) for an Investor Presentation

Fastmarkets' William Adams: Lithium Prices Have Yet to Peak, but Expect Surprises