AB147 has identified, subject to additional drilling in its vicinity, a potentially mineable domain approximately 30m closer to surface than the shallowest currently planned mining zone

GALENA MINING LTD. (“Galena” or the “Company”) (ASX:G1A) announces the first assay results from the substantial ongoing drilling program at Abra Base Metals Project (“Abra” or the “Project”).

Managing Director, Alex Molyneux commented, “We’re astounded at the success of hole AB147 in targeting a potential ‘metal rich’ combination of grade and thickness on the northern part of the eastern limb of Abra’s Indicated Resouce area, which is shallow and close to the current plan for early decline infrastructure. We have added a number of follow-up holes around AB147 to the drilling program with the intention to bring this area into the early years of the mine plan as an optimisation.”

25 diamond core drill-holes (AB144 to AB168) for 10,646 cumulative linear metres of the 2020 Abra Drilling Program have been completed so far. Albeit, this release only includes assays from the first five holes due to the slow progress in receiving assays.

The program was initially planned to consist of approximately 15,000 metres to 18,000 metres of drilling, with three objectives: lead-silver orebody infill; drilling into selected prospective ‘metal rich’ zones for potential life of mine plan optimisation; and gold-copper exploration (see Galena ASX announcement of 4 August 2020). The holes completed to date have been targeting the first two objectives, with the plan to address the third objective later in the program.

Drill-hole AB147 being reported in this announcement encountered a number of outstanding significant intersections reaching a combined down-hole thickness of 86.1 metres. Based on combined cumulative thickness and grades, it’s the best high-grade lead-silver drill-hole in Abra’s history. Importantly, AB147 was one of the holes targeting a prospective ‘metal rich’ zone not currently in the early years of the mine plan, in this case a relatively shallow zone on the northeastern limb of the Indicated portion of Abra’s Mineral Resource (see Figure 1 below). The drill-hole indicates the existence of a potentially mineable domain approximately 30 metres closer to the surface than the shallowest currently planned mining zone. The relative shallowness of this area and proximity to early decline development makes it a target for inclusion in the early years of the mine plan as an optimisation. Based on the success of drill-hole AB147, an additional seven drill-holes have been added to the 2020 Abra Drilling Program in that area and its currently likely the overall program could exceed 22,000 metres.

There are now three drill-rigs operating at Abra with the capacity to drill a cumulative 1,400-1,800 metres per week. Assays have taken some time because drilling initially commenced with one drill-rig only and it took some weeks to ramp-up to three rigs due to drill-rig availability. Assays have also been slower to be received than for past programs due to capacity issues with sample logistics operators and lab backlogs.

Assays for five drill-holes (AB144 to AB148) are being reported in this announcement and assays for 20 completed holes remain pending. The location of the reported holes and significant intersections are graphically represented in Figure 1 and Figure 2 (below) and detailed in Appendix 1, together with drill collar locations in Appendix 2. 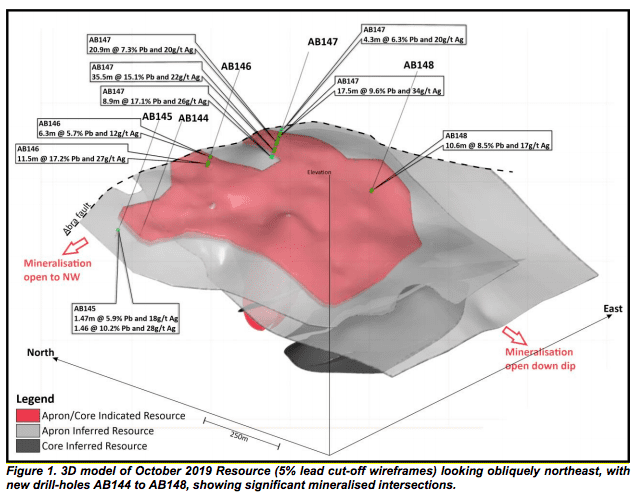 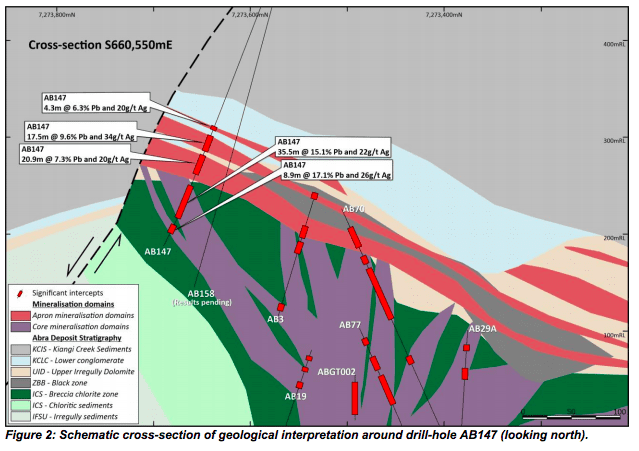 The Board of Directors of Galena authorised this announcement for release to the market.

The information in this report to which this statement is attached that relates to exploration results and drilling data is based upon information compiled by Mr Angelo Scopel, MAIG, a full time employee for Abra Mining Pty Limited. Mr Scopel has sufficient experience relevant to the style of mineralisation and type of deposit under consideration and to the activity which they are undertaking to qualify as a Competent Person as defined in the 2012 Edition of the Australasian Code for Reporting of Exploration Results, Exploration Targets, Mineral Resources and Ore Reserves. Mr Scopel consents to the inclusion in the report of the matters based on this information in the form and context in which it appears.

About Abra Base Metals Project

86.16% owned by Galena, the Abra Base Metals Project (“Abra” or the “Project”) is a globally significant lead-silver project located in the Gascoyne region of Western Australia (between the towns of Newman and Meekatharra, approximately 110 kilometres from Sandfire’s DeGrussa Project).

Galena completed an outstanding definitive / bankable feasibility study (“FS”) (see Galena ASX announcement of 22 July 2019) for development of a mine and processing facility with a 16-year life producing a high-value, high-grade lead-silver concentrate containing approximately 95kt of lead and 805koz of silver per year after ramp-up. Based on a pre-development capital expenditure estimate of A$170 million, the FS modelled a pre-tax net present value for Abra (at an 8% discount rate) of A$553 million and an internal rate of return of 39%.1