Piedmont Lithium Limited (ASX:PLL,NASDAQ:PLL) (“Piedmont” or “Company”) is pleased to announce the Company has resumed drilling on its properties located within the world-class Carolina Tin-Spodumene Belt (“TSB”) in North Carolina 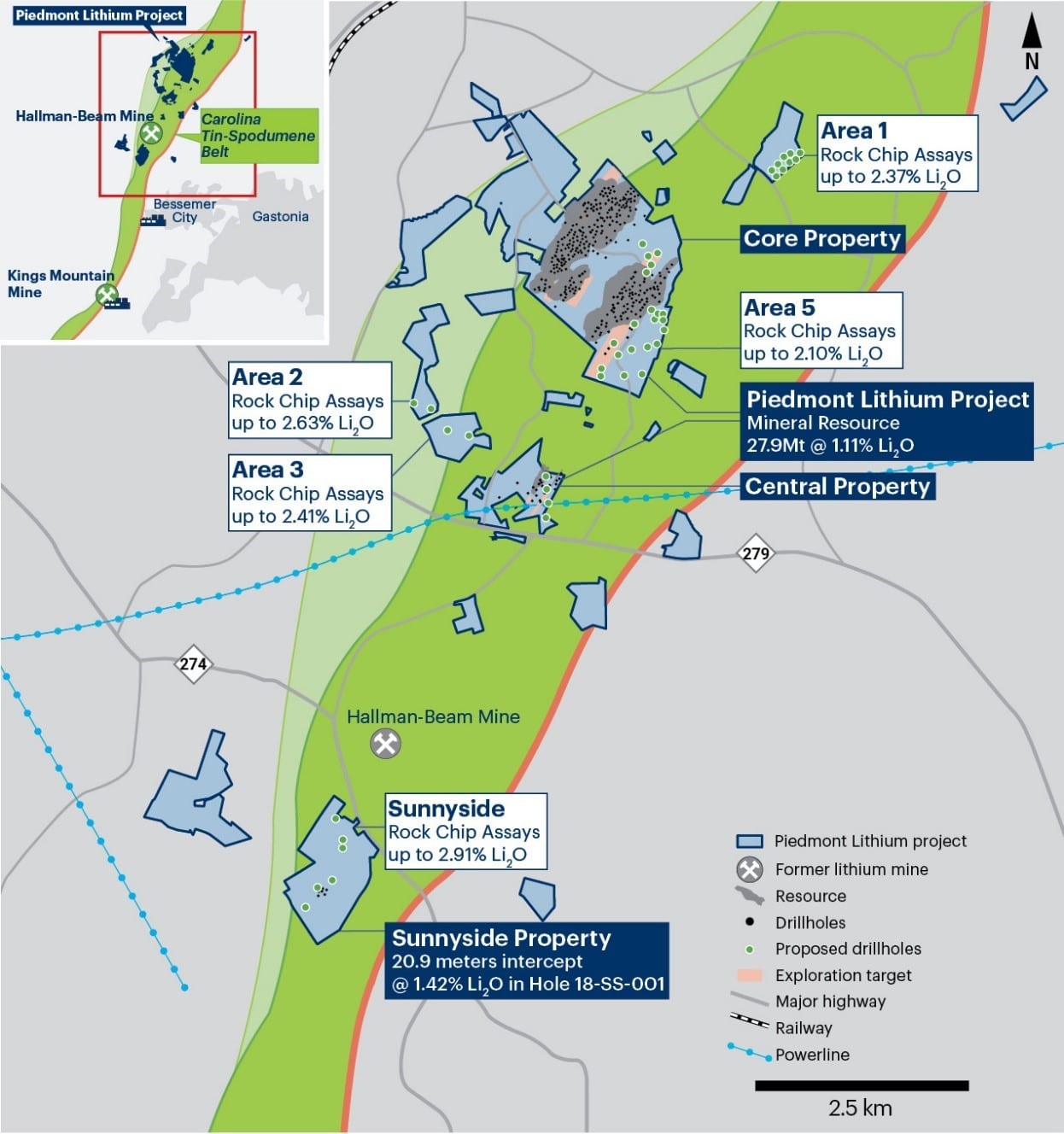 Piedmont Lithium Limited (ASX:PLL,NASDAQ:PLL) (“Piedmont” or “Company”) is pleased to announce the Company has resumed drilling on its properties located within the world-class Carolina Tin-Spodumene Belt (“TSB”) in North Carolina, USA. The drill program will consist of approximately 5,600 meters. The program’s primary objectives are to drill Exploration Target areas on the Core and Central properties, as well as previously untested occurrences of spodumene bearing pegmatite on regional properties (Figure 1).

Approximately 50% of the total drill holes are allocated for the eastern portion of the Core property. These drill holes will test two Exploration Target areas previously identified (refer announcement dated June 24, 2019). The Company will additionally explore Area 5 (Figure 1), which is outcropping mineralization with assays up to 2.10% Li2O (refer announcement dated January 27, 2020). Several areas of low mineralization potential will also be tested to determine whether these areas offer additional Resource potential or are better suited for waste rock storage and or mine infrastructure.

The remainder of the proposed drilling will be distributed on Piedmont’s regional properties. Drilling at Area 1 (Figure 1) will target a large robust soil anomaly along with outcrops of spodumene bearing pegmatite that range up to 2.37% Li2O. Initially, Area 2 and 3 (Figure 1) will receive limited drilling that will target significant soil anomalies and spodumene in outcrop. At Sunnyside, soil anomalies and newly identified spodumene pegmatite occurrences will be targeted as well as potential follow up drilling from the 2018 drilling reported in our announcement dated October 16, 2018 (20.1 meters @1.42% Li2O). Prioritization of drilling will be results based, not all the regional targets may get drilled.

Keith D. Phillips, President and Chief Executive Officer, commented: “We are excited to once again have drill rigs in the field. The Carolina Tin-Spodumene Belt is one of the world’s most significant spodumene occurrences, and there are many high-priority targets remaining on our properties. Spodumene is the dominant feedstock for the fast-growing lithium hydroxide market, and with over 80% of the world’s hydroxide currently being produced in China, this is an opportune time for Piedmont to grow its mineral resources in the United States.”